Close
Trending News
HomeSport‘When does your Only Fans come out?’ Russian UFC star Albu flaunts well-rounded figure as she lounges on bed in thong (PHOTOS)

‘When does your Only Fans come out?’ Russian UFC star Albu flaunts well-rounded figure as she lounges on bed in thong (PHOTOS)

‘When does your Only Fans come out?’ Russian UFC star Albu flaunts well-rounded figure as she lounges on bed in thong (PHOTOS)

Russian UFC fighter Alexandra Albu has delighted her growing army of online admirers with an image of herself lying suggestively on a bed with just a thong to cover her modesty.

The strawweight stunner, who owns a 2-2 record in the UFC, regularly supplies her almost 70,000 Instagram fans with pictures of her well-toned posterior alongside clips of herself training for upcoming octagon assignments.

This week was no exception as the 30-year-old shared a stylish snap of herself draped topless along a bed, wearing only a black thong as she arched her backside upside upwards.

The artistic image won instant praise from admirers, with one swooning: “Bloody hell, when does your OnlyFans come out?”

“Did anyone even notice the picture on the wall?” another distracted fan joked.

One response simply settled for “beautiful”, while another gushed “Bellissima!”

The Moldovan-born Albu now fights out of Moscow and has dual citizenship.

‘Stitch’ burst onto the UFC scene back in 2015, winning her first two bouts before suffering a lengthy layoff and slipping to defeat in her subsequent two contests – most recently losing a split decision to Thai fighter Loma Lookboonmee at a UFC Fight Night event in October 2019.

Judging by her Instagram posts, the setback hasn’t blunted karate black belt Alba’s desire to continue to forge a career in the fight game as she trains in the Russian capital, awaiting her next contest.

In the meantime, fans can content themselves with images of Albu’s well-honed physique as she stays in fighting shape. 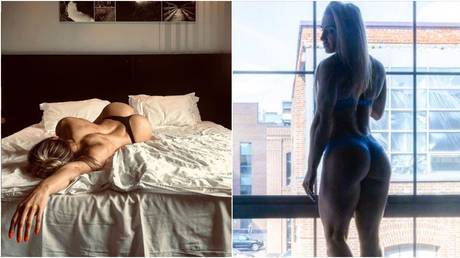