Close
Trending News
HomeSport‘What the f*ck?’: Hilarious scenes as Mike Perry walks out to WRONG SONG at UFC 255… but sings along anyway (VIDEO)

‘What the f*ck?’: Hilarious scenes as Mike Perry walks out to WRONG SONG at UFC 255… but sings along anyway (VIDEO)

‘What the f*ck?’: Hilarious scenes as Mike Perry walks out to WRONG SONG at UFC 255… but sings along anyway (VIDEO)

Mike Perry’s wild week continued as he walked out to the wrong song before his welterweight fight with Tim Means at UFC 255, with the DJ playing Beyonce hit ‘Halo’ – but that didn’t bother Perry, who belted out the words anyway.

Perry’s build-up to the fight had been less than ideal after ‘Platinum’ missed weight by a whopping 4.5lbs on Friday, relieving him of 30 percent of his purse.

Things didn’t get off to an auspicious start on fight night at the UFC Apex either, as the arena apparently made a mistakes with Perry’s walkout music.

As Perry appeared alongside pregnant girlfriend and cornerwoman Latory Gonzalez, the strains of Beyonce’s smash hit ‘Halo’ struck up, leaving the fighter puzzled.

The wrong song was playing when Mike Perry walked out, but he still sang along 😂

“Is this f*cking halo? What the f*ck?” Perry asked.

“Wrong song, but I was gonna pick this sh*t,” he added, pointing to girlfriend Gonzalez.

The UFC commentary team of Joe Rogan and Daniel Cormier found the incident hilarious, speculating that Perry might have selected the song but simply forgotten.

They gave the man Beyonce? Whoever played that song was straight up trolling him lol

Might be funniest walkout ever lmao. The last guy u expect to start singing that 😂

I hated him n Suddenly I’m rooting for him 😂

Whatever the reason for the mix-up, Perry didn’t appear overly concerned, belting out the words of the hit all the way into the octagon.

Sadly for Perry, the unusual song choice didn’t provide inspiration as he lost a slugfest to 36-year-old veteran Means via unanimous decision, suffering a suspected broken nose in the process. 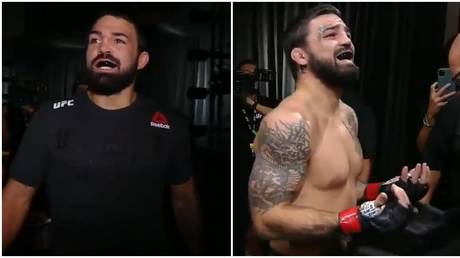