‘What on Earth is he doing?’ Karting ace stuns fans by HURLING BUMPER at cars in ‘absolutely unacceptable’ attack on track (VIDEO)

‘What on Earth is he doing?’ Karting ace stuns fans by HURLING BUMPER at cars in ‘absolutely unacceptable’ attack on track (VIDEO)

Viewers of the FIA Karting World Championship final have called for Luca Corberi to be banned for life after he hurled his bumper at a car from the side of the track before appearing to physically assault a rival after the race.

The 23-year-old former junior champion was declared “public enemy number one” by commentators after he stood by the side of the circuit and waited to throw his bumper into the path of another car as it raced in the showpiece in his native Italy.

Corberi, whose family owns the Lonato track where the race took place, is believed to have directed his attack at youngster Paolo Ippolito after footage later emerged that appeared to show him launching himself at his rival in a violent physical confrontation.

“What’s he doing?” asked an astonished TV pundit as cameras spotted Corberi standing next to the track while wielding the debris from his kart.

Another video appears to show a violent post-race incident between Corberi and Paolo Ippolito. The pair were running 15th and 16th at the time of Corberi’s retirement.https://t.co/aZtEjQdj3N

“What is Luca Corberi playing at? What on earth is he doing?”

Corberi’s attempt to endanger his opponent appeared to come to little as the field flashed past him. “I’m sorry, that is absolutely unacceptable,” exclaimed the shocked commentator.

“He’s going to completely negate the officials. They’re going to walk across the circuit. Luca Corberi is walking in and he should be waiting at the marshal post.

“I would guess that it wasn’t an engine seizure. He clearly feels that somebody has done him wrong, in some way.”

Shouldn’t be allowed to compete again and should be charged by the local police for at least assault.

Minimum should be banned for the rest of this and all of next year.

@fia Ban this guy from racing for lifetime. We don’t need people like this

CRG Srl driver Ippolito finished tenth in the race and then appeared to be filmed being pushed to the ground and punched after the race by an attacker who many viewers identified as Corberi.

“This is disgusting behaviour,” said one fan. “I’m all for kids learning and being educated but this strikes me as a kid with all of the privileges and no sense of reality or care for anyone. Awful.”

Others suggested more serious punishments. “He shouldn’t be allowed to compete again and should be charged by the local police for at least assault,” one argued, while another said: “Next level anger going on right there. Lifetime ban? Attempted murder?”

The FIA’s official accounts did not offer an immediate response to the incidents beyond publishing the results of the race.

This is disgusting behaviour! I’m all for kids learning & being educated but this strikes me as a kid with all the privileges with no sense of reality or care for anyone – awful 👎🏻

Lifetime ban from all forms of racing, period.

Corberi’s parents run the popular track under their South Garda Karting business, and he is said to have played an increasingly important role in managing the circuit since starting his racing career in 2012.

Speaking in June, Corberi had predicted that this year’s race would not be as dramatic as the 2019 version, when Marijn Kremers, who finished second on Sunday, took the glory in a dramatic contest.

“The 2020 edition will probably not be as remarkable as last year’s but we will do our best to make it a successful event,” Corberi told Kart Sport News.

“We are standing ready, with confidence and determination, to face the new situations that the future holds in store for us.” 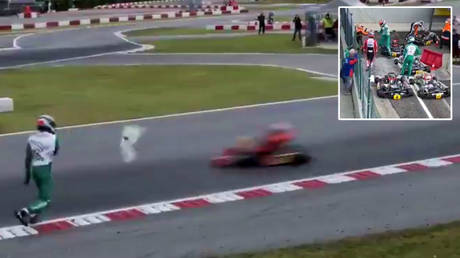