‘What IS he smoking?’ Boxing great De La Hoya derided after claiming Golovkin would be ‘easy’ fight – TWELVE YEARS after retiring

‘What IS he smoking?’ Boxing great De La Hoya derided after claiming Golovkin would be ‘easy’ fight – TWELVE YEARS after retiring

Shocked fans have joked about former champion Oscar de la Hoya’s past cocaine use after the 47-year-old bafflingly talked up his chances against feared puncher Gennady Golovkin, claiming a fight with the Kazakh would be “easy”.

Despite winning 11 world titles in six weight classes, De La Hoya was considered well past his peak when he bowed out in 2008 following a fourth defeat in seven fights, retiring in the eighth round against Manny Pacquiao.

As well as Pacquiao, “The Golden Boy” took on and lost to three of the sport’s greatest stars during the final five years of his career, suffering respectable defeats to Floyd Mayweather, Bernard Hopkins and Shane Mosley.

Current IBF and IBO champion “GGG” remains one of the world’s most dangerous fighters at the age of 38 and has lost just once in 42 fights, losing by decision to four-division champion Canelo Álvarez in 2018 as part of a concussive career in which he has produced 35 knockouts.

I hope this doesn’t become a trend or one of our legends is going to get hurt and hurt bad. De La Hoya is 47 and Golovkin is one of the nastiest punchers around, even at this stage.

I hope no one with influence entertains this.. https://t.co/wI5nZMKugZ

“When reminded that he was 47 and had not boxed for 12 years – since being beaten up for eight rounds by Manny Pacquiao – and that Golovkin was nine years younger than De La Hoya and still an elite fighter, De La Hoya quickly responded: “He’s older as well.””

That formidable record does not seem to hold any trepidation for De La Hoya. “You know how easy GGG would be for me?” he told Boxing Scene, adding that he was “90 percent” certain he would be back in the ring.

“In my mind, it would be that easy. I would definitely consider it, that’s for sure.”

De La Hoya sounded intent on becoming the latest legendary fighter to come out of retirement, pledging that he could “comfortably” make the middleweight limit after former opponent Ike Quartey said he would consider returning after 14 years out to face his old foe.

Fans were less convinced by De La Hoya’s extraordinary boasts, responding with accusations that he was deluded and jibes about his admission in 2018 that he had taken cocaine.

“He’s damaging his legacy at this point,” blasted one. “Young people know him more for being a complete idiot rather than the great fighter he was. Kind of sad, really.”

A critic confessed: “It’s a stupid match-up and any sanctioning body that approves this should be closed down.

“But I would absolutely pay money – whatever the PPV cost would be – to watch GGG either beat the everlasting sh*t out of Oscar over 12 rounds or knock him the f*ck out in one punch.”

Another more succinctly warned: “GGG would decapitate you.”

What the fvck is he smoking? GGG would end him in nomore than 3 to 4 rounds max

De La Hoya admitted that the much-anticipated veteran clash between icons Mike Tyson and Roy Jones Jr in California on Saturday would inform his decision on whether to launch a comeback.

“I’ve already bought the pay-per-view,” he said of the lucrative scrap between two men well into their 50s.

“I’m the first one to turn on my TV and I’m excited to watch and see how Tyson feels and how he looks, because that’s going to be a huge determining factor [in my potential comeback].

“We had similar careers, similar paths. We’ve had the fast life outside the ring. I want to see how he looks.

GGG would decapitate you

He’s damaging his legacy at this point. Young people know him more for being a complete idiot rather than the great fighter he was. Kind of sad really

“If his body breaks down in one round and Jones beats him or knocks him out then I have to think twice about doing what I’m going to do.”

De La Hoya could find a broadcasting deal easy to organize thanks to the contract between his company, Golden Boy Promotions, and US streaming giants DAZN.

“It’s obviously an open market for me,” he said, describing himself as a “free agent, baby”.

“It’s a whole different negotiation for me. But whatever works best for me, whether it’s ESPN or DAZN.” 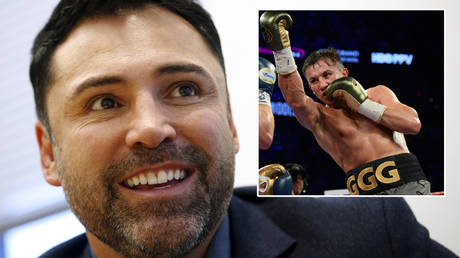