In yet another reminder that MMA isn’t a sport for the feint of heart, Polish star Joanna Jedrzejczyk has posted images on social media of an horrific gash she suffered to her shin while preparing for her UFC comeback.

Jedrzejczyk, the former UFC strawweight champion, hasn’t competed in the cage in more than a year since coming up short in a Fight of the Year contender against then-champion Zhang Weili in March 2020 – and she is lucky that her eventual return to the Octagon doesn’t look set to be delayed by too long after she showed off a nasty cut to her leg.

The Polish striker, who was formerly considered to be the top female fighter in all of mixed martial arts, posted an series of images of the deep cut to her Instagram account, along with a message warning her fans to “swipe left at your own risk“.

Incredibly, Jedrzejczyk confirmed in the accompanying message that she has been told by doctors that the gruesome cut won’t severely affect her ability to keep training ahead of rumors of a summer return to the cage.

“So, you want to be a fighter?” she wrote, thanking her surgeons for “quick and great hospitality on ER.”

“Swipe left at your own risk. The good thing is that I can be back to training tomorrow morning.

Christ what did she kick, a circular saw? pic.twitter.com/KjrhDWzGir

Unsurprisingly, Twitter was quick to react to the images – with one fan wondering aloud what it was that Jedrzejczyk did to suffer such a deep cut to her leg.

“Christ, what did she kick – a circular saw?” wrote one fan.

Given that Jedrzejczyk says she won’t be facing an extended spell on the sidelines following the injury, the 33-year-old will now likely continue her efforts to force a third fight with reigning UFC champ Rose Namajunas, who dethroned Zhang with a stunning high-kick knockout at the recent UFC 261 event in Jacksonville, Florida.

Jedrzejczyk’s undefeated streak was ended in New York in late 2017 when she was brutally knocked out in the first-round of her title defense against Namajunas – who added a second successive defeat to the Pole’s career ledger months later.

Since then, Jedrzejczyk has gone 2-2 in the cage by beating Tecia Torres and Michelle Waterson, as well as dropping fights to Zhang and Valentina Shevchenko. 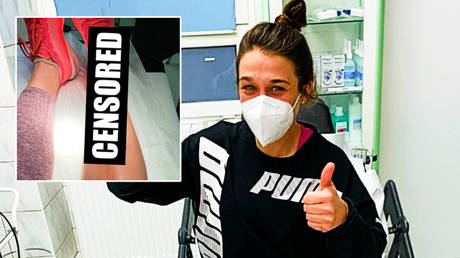