‘What are you waiting for?’ Italian TV presenter Diletta Leotta hooks up with Zlatan for workout as striker teases super-fit host

‘What are you waiting for?’ Italian TV presenter Diletta Leotta hooks up with Zlatan for workout as striker teases super-fit host

After teasing television temptress Diletta Leotta for “slacking off”, ripped striker Zlatan Ibrahimovic has been filmed encouraging the host as she rises from her bed, saunters in her lingerie and punches his abs in a sports bra.

Leotta, who is known for her revealing outfits while presenting from games, posed in a plunging sports bra and shorts as she pictured herself relaxing on a rooftop to set up part of an exchange in which in-form forward Ibrahimovic became her personal trainer.

The striker had used footage alongside Leotta earlier in the week to boast about his obsession with the gym, replying to her rooftop picture to warn her to stop “slacking off”.

The Serie A host then published a film which begins with her throwing punches in an all-black gloves, sports bra and shorts combo, revealing her target as Ibrahimovic’s muscular tattooed torso.

As the sparring sequence ends, the DAZN presenter wakes up in bed to find Ibrahimovic in her bedroom, waiting for her to rise and work out.

Leotta heads to the kitchen in a skimpy lace outfit and attempts to brew coffee while the stern-faced Swede points at his watch, but she is soon transported to a rooftop where she performs core exercises while wearing heavy make-up.

Ibrahimovic then offers her tips while she squats in a lounge before heading past her as she has a drink after the session, looking unimpressed by her lack of movement.

“What are you waiting for?” asks Diletta in the clip.

“Otherwise I will tell Ibra.”

Ronaldo’s side have all but won the title this season, and Ibrahimovic is no fan of the Portuguese, once describing his mega-money move to Italy as “bullsh*t”.

The 38-year-old Sweden all-time top scorer engaged in mind games with Ronaldo earlier this week when the Juve forward tried to put him off as he prepared to take a penalty for AC Milan.

Ibrahimovic showed he has mental as well as physical strength by dispatching the spot kick to score the first of Milan’s four goals as they came from 2-0 down to beat the league leaders in stunning style.

“Train like a god,” Ibrahimovic announced in typically self-congratulatory fashion, reproducing the video with Diletta for the pleasure of his following of more than 43 million on Instagram. “Maybe you can get to my level.” 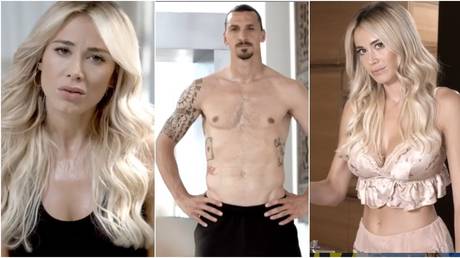