Serena Williams says she “loved” her meeting with Maria Sharapova at the Met Gala last month, after photos hinting at a thaw between the two former warring tennis rivals shocked fans.

The US tennis queen was pictured smiling alongside the Russian five-time Grand Slam winner at the glitzy New York fashion show, prompting some fans to wonder whether they were “hallucinating.”

Venus Williams, Maria Sharapova and Serena Williams took a picture together at the #MetGala!?

What in the world?! pic.twitter.com/h57TYdwOBN

The pair shared an often tetchy on-court rivalry sparked by Sharapova’s sensational victory over Williams in the 2004 Wimbledon final when the Russian was just 17 years old.

Williams would go on to dominate their subsequent meetings on court, but there was no love lost between the two as they often issued barbed public comments and purportedly even feuded over Bulgarian tennis heartthrob Grigor Dimitrov.

However, that appears firmly in the past after the two posed for pally photos at the Met Gala along with Serena’s star sibling Venus.

Twenty-three-time Grand Slam singles champion Serena was asked about her relationship with Sharapova in a recent Instagram Q&A with fans, and described the “fun” they’d had in New York.

“What about her?” Williams replied.

“I got a chance to hang out with her at the Met Gala. She’s fun, we talked, we clicked, we laughed, we talked about tennis and it was really, really fun and I loved it!”

The end of the world is near! pic.twitter.com/sdwQLfrnFt

The comments echo those from Venus Williams, who said she and her sister “respect and love” the 34-year-old Russian.

“First of all, Serena and I were talking about Maria the day before,” Venus said amid the fan frenzy over the pictures. “We were like, ‘Damn, I wish Maria was still playing.’

“And we saw her, and we both told her separately, ‘Oh my gosh, we were just talking about you yesterday, we wish you were still on Tour.’

“We were so happy to see each other. There was hugs, there was laughing, there were stories, and there was a photo.”

Sharapova called time on her career in 2020, while the Williams sisters are both still playing.

Serena Williams, 40, continues to chase an elusive record-tying 24th Grand Slam singles title, but has not tasted success at a major since winning the Australian Open in 2017. 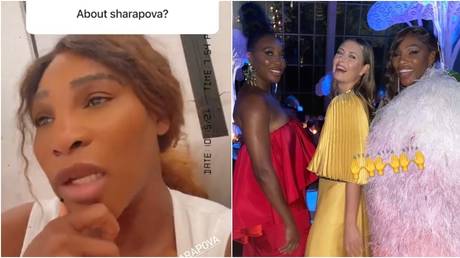 ‘You speak to people in confidence...