What a tribute: Messi mimics Maradona celebration after scoring sensational free-kick to edge past Ronaldo in record books (VIDEO)

What a tribute: Messi mimics Maradona celebration after scoring sensational free-kick to edge past Ronaldo in record books (VIDEO)

Lionel Messi scored a goal that wasn’t a penalty for Argentina for the first time in three years in the Copa America – and appeared to pay tribute to Diego Maradona after edging past rival Cristiano Ronaldo’s free-kick record.

Following a pre-match light show and montage honoring the late Argentina legend, Chile could have been forgiven for taking encouragement from thwarting Messi for more than half an hour at the Estadio Nilton Santos in the hastily-rearranged host country.

Conceding a free-kick within realistic range of goal is never an enviable predicament when Messi is on the pitch. La Roja were promptly punished for doing so as Barcelona’s all-time top scorer ended a wait that had lasted since June 2018 for a goal for his country that was not the result of a penalty, curling an exquisite effort beyond former Manchester City goalkeeper Claudio Bravo.

Messi appeared to imitate an iconic Maradona celebration to mark his magnificent strike, leaping into the air amid the strange surroundings of the empty stadium while directing an air punch downwards.

That gave Messi fans one bragging right in the seemingly endless debate over who is the greatest modern footballer between Cristiano Ronaldo and his arch-rival, taking ‘the flea’ one direct set-piece goal beyond the Portugal captain’s total of 57.

The last time Messi lauded Maradona with a tribute, he was fined thousands of dollars in Spain for breaking rules to take his shirt off, revealing the strip of Newell’s Old Boys, who Maradona played for in his homeland.

Argentina could not hold on in a frenetic first match in Group A of the showpiece.

Lionel Messi’s free kick against Chile was his first non-penalty goal with Argentina in a competitive match since the 2018 World Cup vs Nigeria.

Messi’s former Barca teammate, Arturo Vidal, was denied from the penalty spot after 57 minutes, but Eduardo Vargas stabbed in the rebound to deny Argentina three points.

According to a site dedicated to the highly contentious rivalry between Messi and Ronaldo, the one-club man scores from a free-kick roughly every 16 matches.

The Juventus forward takes slightly under three matches more to find the net from a dead ball outside the penalty, requiring 19 games to Messi’s 16.

Messi admirers on social media pointed to the fact that their hero had scored five free-kick goals to Ronaldo’s 30 in early 2012, changing that discrepancy rapidly after Barcelona appointed him as their regular dead ball specialist. 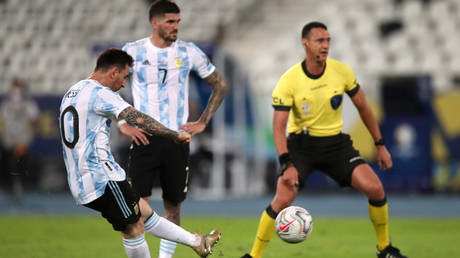