Athletes and fans have expressed their shock and heartache after hugely popular two-time snowboarding world champion and Olympian Alex ‘Chumpy’ Pullin, who was just 32, died in the water off the Gold Coast of his native Australia.

Surfers and lifeguards rushed to rescue three-time Winter Olympics star Pullin after he was found drowning on the ocean floor by a fellow diver during a morning session at Palm Beach, where his family, including model girlfriend Ellidy Vlug, were reportedly on the sand.

Paramedics were unable to save Australia’s best-known boardercross athlete, who had been freediving while wearing a weight belt without oxygen.

“The patient was brought into the beach, as we understand it in an unconscious state.”

“It appears he was diving alone,” he added. “There were other divers out there but he was not with a friend.”

Pullin was Australia’s flag-bearer at the Sochi Games in Russia in 2014, representing his country at three Olympics and winning the World Champions in 2011 and 2013, making him the first Australian winter sports athlete to defend a World Championship title.

Onlookers who had watched the horror unfold from the beach returned to leave flowers and create memorials on the shore, while organizations and figures from across the sport shared their shock at the death of a champion who had published videos of himself diving and fishing with his family just days earlier.

My little boy with #Chumpy at ⁦@_hotham⁩ last year. Alex loved the kids and was so generous with his time. My deepest sympathy to his relatives and friends and the entire Aussie snowboarding family. What a shocking loss. pic.twitter.com/Uosc80hD81

People who witnessed the tragic death of Alex Pullin have returned to lay flowers on the sand at Palm Beach. Full story coming up on ⁦@9NewsGoldCoast⁩ ⁦@9NewsQueensland⁩ pic.twitter.com/FalSjI1k8g

“The world has lost a special soul today,” said Olympic freestyle skier gold medalist Lydia Lassila, who said she had “no words to express the sorrow”.

“Your love for life, your beautiful heart, your talent in everything you did will never be forgotten.”

Pullin was known for his love of music and hosting of an annual snow sports event for children at the leading Hotham resort.

“Alex loved the kids and was so generous with his time,” said a fan who shared a photo of Pullin with her son. “What a shocking loss.”

The experienced free diver regularly enjoyed spearfishing and had described an “unreal day in the ocean” off the Gold Coast weeks before his tragic death.

Vlug had shared a photo of Pullin lying in bed with their dog hours before his death. On his birthday last year, she wrote on Instagram: “I feel so lucky to wake up most days to you singing and jamming in the kitchen. I love you beyond words.”

In a statement, Snow Australia said it was “shocked and saddened” at the death of a “beloved” figure.

The NSW Institute of Sport, where Pullin was a scholar between 2010 and 2019, said: “He reached the very pinnacle of his sport as a two-time men’s snowboard cross world champion, becoming the first ever Australian winter sports athlete to win back-to-back world titles.

“Alex was an extraordinary individual who pursued his passions in sport and in life, and his loss will be felt by all at Team NSWIS and across the Australian sporting community.” 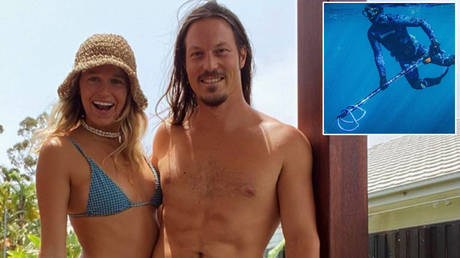