‘We’ve had more people show up for a sponsored clean up of the local area’: Irish football club roasts Man City title celebrations

‘We’ve had more people show up for a sponsored clean up of the local area’: Irish football club roasts Man City title celebrations

You won’t see Bray Wanderers making any big moves in European football anytime soon, but the Irish minnows couldn’t resist a sly dig at Man City’s title celebrations which attracted “dozens” of fans to celebrate at the Etihad.

Manchester City secured their seventh English top division title on Tuesday without even having to kick a ball after their neighbors, Manchester United, suffered a 2-1 home defeat to Leicester City, mathematically guaranteeing that Pep Guardiola’s side couldn’t be caught in the Premier League title race.

It is the Spaniard’s third league title since joining the club in 2016 and their first since their triumph in the 2018-19 campaign, but judging by some of the somewhat muted scenes on the blue half of Manchester, you mightn’t have known it.

British broadcaster Sky Sports had their cameras present for the celebrations but didn’t quite capture an overwhelming party atmosphere when they noted that there were “dozens” of supporters on site to celebrate their league win.

And that was the only opportunity that the Irish side’s cheeky social media manager needed.

We’ve had more people show up for a club-sponsored clean up of the local area.

“We’ve had more people show up for a club-sponsored clean up of the local area,” read a message from Bray Wanderers’ official account.

In the three hours since they posted the tweet, it has been retweeted over a thousand times and received more than 11,000 likes on the social media platform.

And their cheeky troll job certainly went down well.

And we’ve had more people show up for a protest

Another, who is apparently a Manchester United supporter, joined in with the pile-on, saying: “We’ve had more people show up for a protest.”

A third summed it up a bit more simply, declaring Bray’s dig at City as the “tweet of the year“.

This is not the first time that Wanderers’ social team have sent a tweet viral: while elite football clubs were reeling from the announcement of the proposed European Super League last month, Bray drily announced that they would not be taking part – earning more than 160,000 likes, retweets and replies, belying their current modest following of under 19,000. 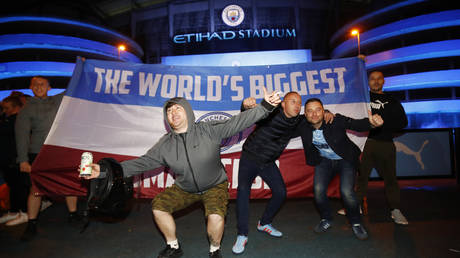