‘We’ve been top for five minutes’: Chelsea fans accused of being fickle as ‘humble’ Lampard laughs off title talk after latest win

‘We’ve been top for five minutes’: Chelsea fans accused of being fickle as ‘humble’ Lampard laughs off title talk after latest win

Chelsea fans have exchanged barbs over the level of credit coach Frank Lampard should take for the club’s change in fortunes, rowing after the rookie boss led them to the top of the Premier League for the first time in his reign.

Chelsea won at Newcastle for only the second time in eight attempts on Saturday, sending them to the summit and leaving Lampard to face welcome questions about their title chances, less than two months after they had begun the season with one win in three matches.

The team’s disastrous defensive display at lowly West Brom – which had looked like a hangover from their terrible campaign at the back last time out – had led to serious doubts among fans and critics about Lampard’s coaching.

“I’m not going to get excited about being top of the table for five minutes,” chuckled a wary Lampard after his side won 2-0 through goals by Timo Werner and Tammy Abraham to edge ahead of Leicester, Tottenham and Liverpool. “It’s time to stay humble and know it’s a long race.

Yea the Lampard out PLASTICS need to be taking a long hard look at themselves at the moment. Pathetic.

“It’s a tough match to come here after the international break, which brings challenges. We dominated the game.”

“Do people still want Frank Lampard out?” asked one fan in a tweet that they later deleted after a torrent of rancour ensued.

“I’m seeing a lot of people celebrate the win today with Frank Lampard still as the Chelsea manager.

So..
I think it’s safe to say Frank Lampard CAN coach a defence 🙂

No, Anthony Barry can

Largely down to Anthony Barry mate

“In my opinion, you can’t choose when you support us. You support us regardless of the result. I hope you are all embarrassed.”

Another agreed: “The ‘Lampard out’ plastic fans need to be taking a long hard look at themselves at the moment. Pathetic.”

Russian chairman Roman Abramovich clearly expected Chelsea to string wins together and challenge at the top of the table, and the owner’s expensive recent investments – $65 million defender Ben Chilwell and $59 million striker Timo Werner were among the stars of the impressive performance – have created high expectations.

Some argued that new defensive coach Anthony Barry had been responsible for their new-found impenetrability and pointed out that Newcastle, whose side was worth a fraction of Chelsea’s, are consistently one of the Premier League’s lowest scoring teams.

Seeing these Chelsea academy boys smashing it, with Frank Lampard as the manager whilst we sit top of the Premier League is something special.

It’s Newcastle mate. They are allergic to going forward.

“I have to be happy,” said Lampard. “This is a dangerous game for us.

“We lost here last year, so it’s a nice progression to come here and get the right result.

“We’ve all seen these games before. Newcastle started to become slightly more positive at the end of the first half.

“You have to think about the bigger picture and know that there’s work to be done. A big part of defending is concentrating and not being lax in moments.

Shout out to Frank Lampard again. Tactically astute and great game management. Brought in the height towards the end. That Giroud for Ziyech sub was very underrated. He has definitely unlocked a very potent machine with this 4-3-3 structure #NEWCHE

What’s Lampard’s reasoning for making an attacking substitute when you’re 2-0 up away from home with less than five minutes left to play?

“We need everyone in the squad. This is a grueling season, as everybody keeps talking about recently. It’s good for confidence that we get another clean sheet.”

Those unconvinced supporters are likely to find out more about Chelsea’s title credentials in a week’s time, when they encounter their toughest test of the month with the visit of in-form former leaders Tottenham.

Spurs are one of the teams who could overtake Chelsea before Saturday is out, with Jose Mourinho’s team hosting fellow contenders Manchester City later in the day.

Liverpool and Leicester play each other at Anfield on Sunday and Southampton, the other side who could realistically leapfrog Chelsea, are at Wolves on Monday. 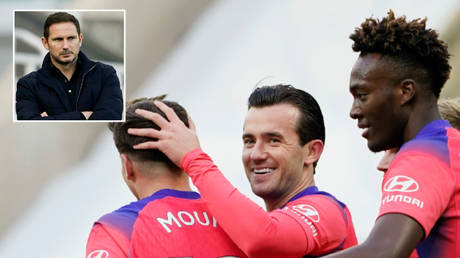