The government of Argentina has announced three days of mourning after the death of football icon and national hero Diego Maradona.

The news broke on Wednesday that Maradona had died after suffering a heart attack at his home in Tigre, just north of Argentinian capital Buenos Aires.

Fernandez also shared an emotional post on his Twitter account with a picture of himself embracing Maradona, writing: “You took us to the top of the world. You made us immensely happy. You were the greatest of all.

“Thanks for having existed, Diego. We will miss you for life.”

One of Argentina’s most famous and beloved sons, Maradona led his nation to victory in the 1986 World Cup with some of the greatest individual displays the tournament has ever seen.

Outside of his homeland he was notably worshipped in the Italian city of Naples, helping Napoli to their first ever Serie A title in 1987 and repeating the feat three years later.

The diminutive playmaker also won the Coppa Italia and UEFA Cup during his time in Italy.

Elsewhere, Maradona enjoyed success with Barcelona in Spain and Boca Juniors in his homeland.

Maradona made 91 appearances in the famous Albiceleste colors of the Argentine national team, scoring 34 times – including two iconic goals at the 1986 World Cup against England in Mexico.

Maradona later went on to manage his country at the 2010 World Cup in South Africa.

His passing will be mourned by millions in his homeland and far beyond, and he will leave a legacy as among the greatest players ever to grace ‘the beautiful game’. 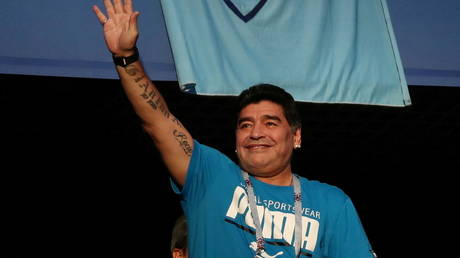 ‘We’ll kick a ball together in the...