Brazilian football icon Pele has offered condolences after the death of Argentinian superstar Diego Maradona, whose sudden passing has shocked the entire world.

The world-renowned footballing legend died on Wednesday at home in Tigre after suffering a heart attack.

“Certainly, one day we’ll kick a ball together in the sky above,” Pele said in a brief statement to Reuters.

Pele and Maradona are widely regarded as two of the greatest footballers in history. They were named joint winners of the FIFA Player of the Century award in 2000.

Maradona led his country to a historic victory at the 1986 World Cup, scoring his famous ‘Hand of God’ goal against England. 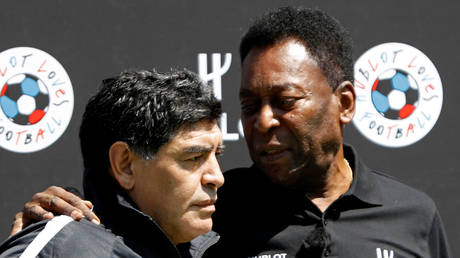