Close
Trending News
HomeSport‘We will never know the real cause’: 20-year-old Belgian cyclist DEAD after collapsing during practice race ahead of new season

‘We will never know the real cause’: 20-year-old Belgian cyclist DEAD after collapsing during practice race ahead of new season

‘We will never know the real cause’: 20-year-old Belgian cyclist DEAD after collapsing during practice race ahead of new season

Professional cyclists have paid tribute to Niels De Vriendt, a young racer who could not be saved despite medics spending 40 minutes trying to resuscitate him after he collapsed while preparing for the season restart in Belgium.

De Vriendt was racing in the municipality of Wortegem-Petegem when he fell ill during the first contest of the restart following the suspension of the cycling season in Belgium.

The race was canceled as medics tried to help after he fell off his bike just eight miles from the finish.

“I’ve heard from local riders that De Vriendt just fell with no contact with a rider or third party,” said local mayor Luc Vander Meeren, adding that no autopsy would be conducted unless De Vriendt’s family ordered one.

“I’m afraid we will never find the real cause. Unfortunately for his parents, it will remain a mystery.”

Sep Vanmarcke, a professional who took part in the race, said De Vriendt had been “very happy to be back at the start” alongside 173 other cyclists.

“It has very quickly become a low point no-one will forget,” he added.

“It’s someone who has given their life when he practices his sport, hobby and passion.

“Again, a young colleague suddenly leaves us. It happens, unfortunately and unexpectedly, but we never get used to it.

“I wish a lot of strength to all the people who were close to Niels.”

De Vriendt’s team, VDM-Trawobo, announced it was in “deep mourning” and had been “hit hard by the death of our promising rider.”

“The emergency services did everything they could to save Niels,” they said.

“Rest in peace, Niels. We will miss you.” 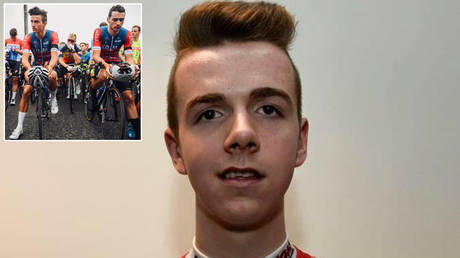