Close
Trending News
HomeSport‘We will continue to speak with Messi’: Barcelona chief has ‘no doubt’ Lionel Messi will STAY at Camp Nou, despite exit rumors

‘We will continue to speak with Messi’: Barcelona chief has ‘no doubt’ Lionel Messi will STAY at Camp Nou, despite exit rumors

‘We will continue to speak with Messi’: Barcelona chief has ‘no doubt’ Lionel Messi will STAY at Camp Nou, despite exit rumors

Messi, who has been at Barcelona for 20 years, has been linked with a momentous move away from the La Liga side when his contract expires next summer. But the club maintains that their talismanic forward will agree terms to extend his stay until the end of his playing career.

Rumors linking Messi with a move away from the club have repeated practically every summer since it was revealed the contract extension he signed with Barcelona in 2017 contained a clause that allowed him to leave the club for free at the end of any season.

However, it emerged last month the clause expired on May 30 meaning that the player will almost certainly remain with the club until the expiration of his contract in a year’s time.

The exit strategy built into Messi’s contract led some to believe that the player was indicating his openness to one day leave Barcelona under specific circumstances, namely if the player was dissatisfied with his relationship with the club.

Bartomeu though, is of the opinion that Messi’s contract situation will be resolved soon.

“We’ve spoken, we are speaking and we will continue to speak with Messi,” he said to Spanish television.

“He wants to finish his career here. We will definitely renew with him. I am in no doubt that he will stay here.”

There have been several rumors of discontent within the club’s ranks under the stewardship of Quique Setien. The former Real Betis boss was appointed as Ernesto Valverde’s successor in January but reports have suggested that certain players are unhappy with his leadership, with club legend Xavi reportedly tapped by the club to take over the reins from next season – though he recently extended his contract as coach of Qatar Stars League football club Al Sadd.

Barcelona currently sit one point behind league leaders Real Madrid, with one more game played and have two games left to play. Should Zinedine Zidane’s side claim the La Liga title, as expected, it would mark the first season since 2007-8 in which Barcelona have failed to win any silverware. 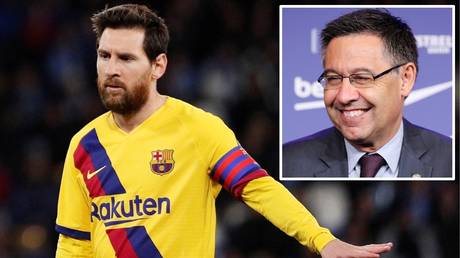