Lionel Messi showed his frustration as Barcelona fell to a 2-1 defeat against Osasuna in their final home match of the season, echoed by experts and fans as the Spanish giants surrendered the Liga title to arch rivals Real Madrid.

Messi offered little more than a disconsolate hand swipe into the Camp Nou air after scoring a free-kick that would have been considered spectacular by most other players, drawing Barcelona level with midtable Osasuna in the 62nd minute of a 2-1 defeat that handed the trophy to Madrid.

Zinedine Zidane’s side were far more comfortable as they went 2-0 up at home to Villarreal, earning their 10th win in a row despite a faintly nervy finale after Vicente Iborra’s late reply.

“We were inconsistent during the season,” Messi told Spanish television after his side’s shock setback. “Real Madrid did their thing. We lost a lot of points. We have to do some self-criticism. We are Barcelona.

🗣️ — Messi: “I said it before, if we continue like this, we won’t win the UCL. Look, we’ve just lost the league.” pic.twitter.com/nfvKw7VPnt

“We didn’t want to end the season like this but it represents how the season has gone. We were a very erratic, very weak, low-intensity team. We lost a lot of points and today’s game is a summary of the season.”

Statistics have shown that Messi has underperformed in terms of goals since Quique Setien replaced Ernesto Valverde in January, scoring only once in his last four games to continue a dismal run of form by his standards.

The Argentina forward is still unlikely to leave the only club of his career but he has surely never been closer to an improbable exit, having fallen out with director of football Eric Abidal earlier this year and questioned whether Setien’s tactics could realistically result in Champions League glory this season.

Speaking after a first half in which Messi hit the crossbar and set up a disallowed Martin Braithwaite goal for a Barca side who had no shots on target, one writer observed: “I don’t think I have ever seen Messi with so little enthusiasm and interest when playing football.”

I don’t think I had ever seen Messi with so little enthusiasm and interest when playing football.

Say what you will about Valverde, but he knew how to get the best out of Messi, playing him as a second striker, freed of defensive responsibilities, in ideal positions to break on the counter.

Under Setién, Messi has to dribble 3-4 players just to have a shot on goal.

Another rued: “Say what you will about Valverde but he knew how to get the best out of Messi, playing him as a second striker, freed of defensive responsibilities, in ideal positions to break on the counter.

“Under Setien, Messi has to dribble past three or four players just to have a shot on goal.”

While one image showed Messi taking on at least five Osasuna players on his own for toiling Barcelona, Madrid boss Zinedine Zidane was full of praise for his squad after the club’s third Liga triumph in 12 seasons.

“I have my role of course but the most important are the players,” said the France legend, whose side moved seven points clear ahead of the final match of the season.

“They’re the ones who fight on the pitch and I’m extremely happy for this group as people, even more than as players.”

Zidane’s three Champions League trophies as Madrid manager mean he has been more successful in Europe than domestically, leaving him overjoyed to have secured his latest glory.

“It’s 38 matches. If you have the most points, it’s the best. Our fans, for their health, today must celebrate from their homes.”

Madrid president Florentino Perez called Zidane “a blessing from heaven”, while captain Sergio Ramos said: “Zidane is the key. We believe in him and his work – he’s unique.”

The truth is, Real Madrid doesn’t miss Ronaldo as much as we would miss Messi if he left the club. Benzema stepped up in RM. Players need to step up here. We aren’t winning the Napoli match at all like this.

Ramos: “This is thanks to consistency and balance. This win has a lot of merit no matter what anyone says.” pic.twitter.com/CU9z0K8Dcq

A Barcelona fan argued that the departure of Cristiano Ronaldo at the end of the 2017/18 season had not unduly affected Real Madrid’s title contention, speculating that Barca’s chances of beating Napoli in their Champions League round of 16 second leg were low.

“The truth is, Real Madrid doesn’t miss Ronaldo as much as we would miss Messi if he left the club,” they said.

“Benzema stepped up. Players need to step up here. We aren’t winning the Napoli match at all like this.”

As rumors intensified that Setien is on the brink of being prematurely dismissed, Messi’s remarks rang ominously for the coach who has overseen Barca dropping points in four of their 10 matches since the restart in Spain.

“The sensations are that the team tries but we leave much to be desired in many games,” said the Liga top scorer. “Everything we have experienced since January has been very bad. We have to change a lot of things, for real.” 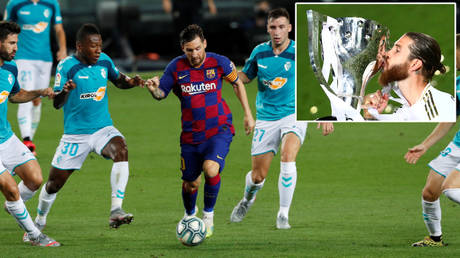