Russian heavyweight Alexander Povetkin has given his first press conference since his spectacular KO win over British favorite Dillian Whyte, in which he said he is focused on a rematch, which his team would prefer in Russia.

“It was perhaps the best shot of my career,” Alexander Povetkin, sporting darkened eyes but a slight smirk and flanked by manager Andrey Ryabinksiy, the head of Russian promotion World of Boxing, said when addressing journalists in Moscow on Wednesday.

Povektin is still revelling in the glory of perhaps a career-best knockout at the age of 40, after being seen as merely a worthy but beatable opponent by Dillian Whyte and his promotional company Matchroom, headed by Eddie Hearn, on the Jamaican-born Briton’s determined path to a world title shot.

The ‘Russian Vityaz’ had gathered some momentum with a recent win over Hughie Fury and a draw with Michael Hunter following a crushing loss to Anthony Joshua, but was considered long past his reign as WBA champion from 2011 to 2013, and even further so from his Olympic gold medal-winning performance at Athens 2004.

Whyte had been in almost perennial waiting for his call to challenge for the WBC title since November 2017, and Povetkin was considered not much more than another step on the trek to the summit of the sport’s glamour division in defense of his interim WBC title.

But then boxing is played out in the theater of the unexpected, and if Povetkin was not expected to win, almost no one saw a precision-perfect uppercut sending Whyte and possibly his long-harbored world title hopes crashing back down to earth. Least of all the man on the receiving end.

“I haven’t watched the fight back, haven’t seen it,” Povetkin said of the finishing punch. “We worked on that shot in training. People can think what they want whether it was a lucky punch or not. There’s that many experts in boxing that I already don’t know what to say about it all!”

“If he hadn’t work on it in training, then it was a lucky punch. But he did, so there was nothing lucky about it,” Ryabinskiy added in support of his charge, whose humbleness didn’t do the evident craftsmanship he displayed in coolly dispatching Whyte justice.

Despite suffering two knockdowns in the fourth round and badly behind on the scorecards, Povetkin called on each of his 15 years of ring experience to haul himself up and come back in the fifth with an inside uppercut that forced referee Mark Lyson to halt proceedings without affording Whyte a count, such was the force the blow.

Where would you prefer to have the rematch, here in Russia or in the UK?

Povetkin: ‘If I’m honest I don’t care where it is, Russia is always with me, wherever I fight’ #Povetkin @EddieHearn @DillianWhyte pic.twitter.com/vDv4zJH9Ey

The moment Whyte hit the canvas should, logically, have decided the number one contender to the WBC title held by Tyson Fury and at stake in Fury’s third fight with American Deontay Wilder, as was initially intended.

However, once the dust had settled it became apparent a rematch clause in the pre-fight contract would be hastily exercised to hopefully position Whyte back on his well-trodden track to a world title.

Relaxed and in unsurprisingly high spirits answering questions from the small gathering of journalists in the Russian capital, Povetkin was pragmatic in his immediate options, and said he was focused on the rematch despite questions circulating about his preferences to fight either Fury or Wilder.

Asked Povetkin whether he wants Wilder, Joshua or Fury next. ‘I’m focused on the rematch… I don’t mind if it happens in Russia or in the UK’ #Povetkin pic.twitter.com/kp4qnRj3lj

“Right now I have a rematch, I’m not thinking about [who I will face]. What can I say about Fury? He’s a strong, skilled boxer, maybe not as technical as Joshua, but I can’t say anything bad about him,” Povetkin said. “He’s a nice, fun guy, whenever we have met,” Ryabinskiy interjected.

Many thought a glimmer of hope to free Povetkin of a perhaps unfancied option of a rematch was offered by virtue of the WBC being allegedly unaware and unwilling to recognize an immediate rematch clause. As it turned out, both parties were happy to agree to a second fight, but a question still lingers over its location.

“The rematch clause is common in such fights. It was written in the contract. If we agreed, it means we have a reason – because we wanted the rematch,” Ryabinskiy said.

Ryabinskiy: ‘The rematch clause was in the contract, we agreed b/c we wanted it, WBC ruled the fight would determine a no. 1 contender, so the rules of the game have changed. We don’t know yet, we’ll figure it out, we’ll see’ #Povetkin ⁦@Tyson_Fury⁩ ⁦@DillianWhyte⁩ pic.twitter.com/vuZMf9oMoQ

“Initially, the WBC ruled the fight would determine a number one contender between these two, so the rules of the game have changed a little. We don’t know yet, we’ll sort that out, we’ll see.

“I don’t see such a big difference boxing here or in the UK. I would want the fight to be here in Russia because there hasn’t been an event of such magnitude here for a long time.

“Why did we want the rematch clause? Because first and foremost, we need to look after the interests of our boxer. For Povetkin, he has the chance to earn decent money out of the current situation and if we have a chance to do that for our boxer, of course we will do that.

“Being the number one contender is never easy. It could last for a year or even two. Fighting now is also a must. That’s the case in a few words. The matter is a lot deeper and a lot more complicated but that’s our position.”

Povetkin was much more laconic than his manager and spared the politics and logistics that must be dealt with as a matter of due course.

“If I’m honest, I don’t care where the rematch will be, whether here or in the UK. Russia is always with me wherever I fight,” he said with a wry, confident smile.

What did @EddieHearn say when you shook hands after the fight?

Povetkin: ‘Nothing, he just congratulated me on the win’ https://t.co/LZ1zvbQBEo

Following the fight, Whyte promoter and fight host Eddie Hearn, who had constructed the Matchroom Fight Camp venue literally in his own backyard in the South of England, offered his congratulations to Povetkin and like any good promoter brought up the issue of a rematch in his own post-fight interview.

“He didn’t say anything, he just congratulated me,” Povetkin said of their interaction, with a knowing smile, indicating if anything of interest was said, it would have remained under the constraints of a simple gentleman’s chat.

Gentlemanly conduct was a theme surrounding the fight, which arose from a picture of Povetkin and his team travelling to Britain wearing outfits similar to those of the characters in the Guy Ritchie film ‘The Gentlemen’, and was also relevant when Whyte refused to touch Povetkin’s outstretched glove at the end of the fourth after knocking him down twice that round, only to himself be knocked out in the fifth.

Although Povetkin himself admitted he hadn’t seen the film and couldn’t comment on whether the movie accurately reflected life among gentlemen from those shores, he complimented the boxing-mad British public, in front of which he has now performed four times.

“I very much like the British public, I like how they love boxing. They know about the sport. I can’t say anything bad about them. They’re great and support great fights even if a fighter from another country wins,” he said.

On the subject of in-ring gentlemanly conduct, Povetkin offered a wry grin: “I think [Whyte not touching gloves] was the best lesson that you should always give your hand.”

Although he was knocked down by Whyte twice, Povetkin insisted Whyte wasn’t the biggest puncher he had faced in his career. “No, why? I don’t think anyone is stronger than Wladimir Klitschko, but I will not deny that Whyte is a very strong guy,” he said.

The haziness on the subject of who will go ahead to fight for a world title will continue, but one contender that the fight without any doubt produced was for Knockout of the Year. Whyte had built a name for himself as a hard banger among boxing’s biggest men, and had only been beaten and stopped by WBO, IBF and WBA champ and arch nemesis Anthony Joshua in round seven, coincidentally the round Povetkin also succumbed to the champion. This time he tasted his own concussive medicine.

With that resounding KO, Povetkin forced the world to sit bolt upright and take note of a drastic change in the heavyweight scene, and while the intricacies of a rematch might take time to resolve, the next step in the near future looks set to be a rematch between the two.

Whether it be again in front of Povetkin’s favored British public or in his own Mother Russia, remains to be seen.

By Danny Armstrong, in Moscow 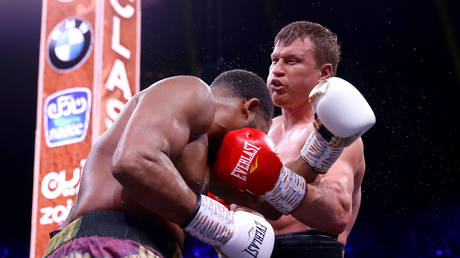