Russian UFC newcomer Tagir Ulanbekov has posted a throwback photo with Khabib Nurmagomedov and revealed the champ’s words to him as he set off for Abu Dhabi, where he has faced hitches in entering the city and became his own chef.

Lightweight champion Nurmagomedov saw off Ulanbekov, one of his long-term training camp partners, as his fellow Dagestani departed for Abu Dhabi ahead of his first fight for the promotion next month.

Former Gorilla Fighting Championship flyweight champion Ulanbekov then posted a picture of the pair together in one of their earliest camps, posing ahead of the Dagestan combat sambo championship in 2008.

Nurmagomedov made his professional MMA debut later that year, winning four times in less than a month with the help of the teenage Ulanbekov in training.

“This morning, seeing me off to Fight Island, [he] remembered: ‘We started in Agvali’,” said Ulanbekov, referencing the district where the snap was taken and the place where Nurmagomedov scored two wins in a day at the Tsumada Fighting Championship 3 in 2009.

Nurmagomedov replied with a series of clapping emojis on his friend’s heavily-followed Instagram account, and the likes of two-time Olympic wrestling champion Roman Vlasov also applauded the nostalgic post.

Almost nine years after Nurmagomedov began his flawless 12-fight current UFC record, highly-rated Ulanbekov has already faced some unexpected tests as he prepares to launch his career with the promotion.

“We arrived in Abu Dhabi and at the post they turned us around without giving any reason,” he told TASS, describing his attempts to access his camp ahead of his contest against Bruno Silva on October 10.

“We drove across another road, they said the same thing. ‘Coronavirus’. Then we figured it out [and] they let us in. But we lost three to four hours.”

Ulanbekov has also been cooking in his hotel room rather than enjoying the luxury lifestyle enjoyed by some athletes breaking into the big time.

He used utensils supplied by Russian former MMA lightweight Murad Machaev, who was already in Abu Dhabi as part of a team with another Nurmagomedov teammate, Zubaira Tukhugov, following the featherweight’s recent defeat to Hakeem Dawodu at UFC 253.

“Murad Machaev brought a stove, a pan, a frying pan, a grater and food,” explained Ulanbekov. “The food did not suit them.”

The showdown with Silva will be his first without Nurmagomedov’s late father, Abdulmanap, in his corner – a figure he has credited with being instrumental in his charge towards the elite level of the sport.

The encounter had been due to take place in July before Nurmagomedov senior’s tragic passing from complications relating to the coronavirus earlier in the month. 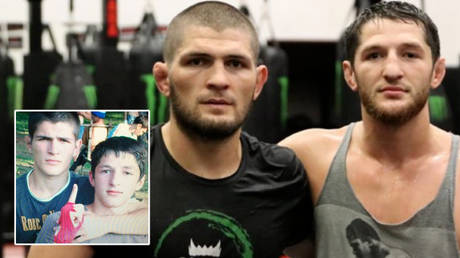