Officials in Sri Lanka have launched a criminal investigation into allegations that India’s famous comeback to win the 2011 Cricket World Cup final happened as a result of match-fixing, with three players suspected of corruption.

Aravinda de Silva, the country’s former skipper and chief selector for the 2011 finals, had been summoned for an interview with investigators on Tuesday, according to local reports.

KDS Ruwanchandra, the secretary to the sports ministry, confirmed to AFP that the police independent Special Investigation Unit on sports-related offences is examining the match, which is widely regarded as one of the most iconic victories in sporting history.

“I tell you that we [Sri Lanka team] sold the 2011 World Cup,” former Sports Minister Mahindananda Aluthgamage said earlier this month. “I tell you this with responsibility.

“I feel I can talk about it now. I am not connecting players, but some sections were involved.

“I don’t want to divulge too much for the sake of the country. I say the match against India, the one we could have won, we betrayed.”

Batting first, Sri Lanka scored 274 for six and removed Sachin Tendulkar for just 18 to leave India on the backfoot after the eventual winners lost two wickets for a meagre 31 runs.

Sri Lanka’s fielding and bowling then drastically deteriorated, allowing India to sweep to a victory that had seemed unlikely before their opponents’ sudden drop in performance and a 91-not-out innings from national hero MS Dhoni.

The International Cricket Council is said to be investigating three unnamed former players over corruption claims, while Sri Lanka’s captain in the final, Kumar Sangakkara, is encouraging Aluthgamage to share his allegations with the governing body.

“Since he says he has evidence and proof, the prudent thing to do is to go to the Anti-Corruption Unit of the ICC and put forth his claims, so they can investigate them thoroughly and come to a conclusion whether what the former minister says is true or not.”

The consequences for any players found guilty are likely to be severe after match-fixing was made a criminal offense in Sri Lanka in November, introducing punishments of up to $555,000 and up to 10 years in jail for offenders.

Sri Lanka has previously been linked to allegations of cricket corruption including claims of match-fixing around a 2018 Test against England. 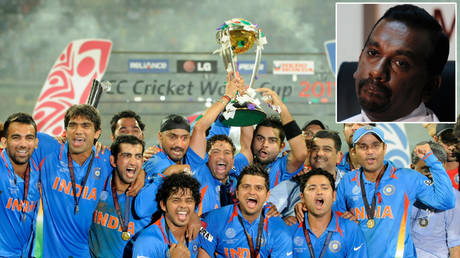 Microsoft ‘to unveil a SECOND new...