‘We sh*tted away 4 years’: LeBron James vents at Trump over Capitol disorder, claims black people have culture ‘stolen’ from them

‘We sh*tted away 4 years’: LeBron James vents at Trump over Capitol disorder, claims black people have culture ‘stolen’ from them

NBA icon LeBron James has claimed America “sh*tted away four years” by electing Donald Trump as the Los Angeles Lakers star voiced his outrage over the violence in Washington DC this week.

“We live in two Americas,” James said on Thursday, speaking one day after pro-Trump supporters stormed the US Capitol.

“And that was a prime example of that yesterday, and if you don’t understand that or don’t see that after seeing what you saw yesterday, then you really need to take a step back – not even just one step, but maybe four or five, or even 10 steps backwards and ask yourself, ‘how do you want your kids, or how do you want your grandkids, or how do we want America to be viewed as? Do we want to live in this beautiful country?'”

“I couldn’t help but wonder, if it was my kind storming the Capitol, what would have been the outcome?” @KingJames addresses yesterday’s events in Washington, D.C. pic.twitter.com/Csgl7ZeSSi

The 36-year-old star claimed that the ugly scenes of pro-Trump supporters breaching the Capitol building further exposed the double standards in the treatment of black people, after the stronger police reaction to the Black Lives Matter protests of 2020.

Four deaths were linked to the violence in the US capital this week, before the news on Thursday that a police officer had also died of injuries sustained during clashes with rioters.

READ MORE: Police officer dies after being injured during US Capitol riots

“If those were my kind storming the Capitol, what would have been the outcome? And I think we all know,” added James, who wore a shirt bearing the slogan ‘Do you understand now?’ before the Lakers’ game against the San Antonio Spurs on Thursday, and had the same message written on his shoes on court.

“There’s no ifs, ands or buts, we already know what would’ve happened to my kind if anyone would have even got close to the Capitol, let alone storm inside the offices, inside the hallways.”

James – who has frequently voiced his disgust of Trump during the Republican leader’s four-year tenure – added that those responsible for Wednesday’s unrest were “terrorists”.

The star’s diatribe continued as he claimed that the US benefits from black culture without paying its proper dues.

“Everyone jumps on the bandwagon of what we provide, what we bring, the way we dress, our music, our culture, our food. Everyone steals from what we do, and then they want to act like they did it or they brought it to this world.

“We don’t get our due diligence, the respect, we don’t get anything back from this country apart from a slap in the face,” James said.

“We don’t get anything back from what we’ve given this country besides a slap in the face.” @KingJames shares his thoughts on being Black in America. pic.twitter.com/d4sx6XnmD5

The four-time NBA MVP put the blame for the disorder firmly at Trump’s door, asserting that the US “sh*t away four years” by electing him in the first place.

“The events that took place yesterday was a direct correlation of the president that’s in the seat right now, of his actions, his beliefs, his wishes,” James fumed.

“Four years ago, I sat there and said this is the beginning of the end for our country. And hopefully it only lasts four years.

Any fans hoping to enjoy sport without politics and protest in 2021 will likely be left disappointed, with stars such as James using their platforms to comment on this week’s scenes.

In the direct aftermath of the violence on Wednesday, the Miami Heat and Boston Celtics issued a joint statement in which they condemned the scenes, as well as expressing their disappointment after a Wisconsin prosecutor decided not to charge a police officer who shot Jacob Blake, a black man, last year. 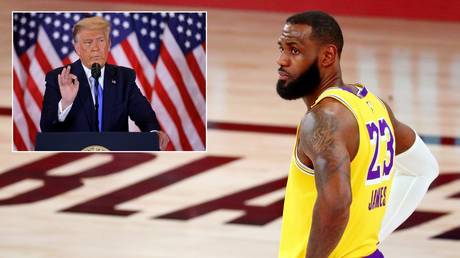