Premier League club Wolves have confirmed that top striker Raul Jimenez had an operation and will stay in hospital after suffering a fractured skull against Arsenal, worrying fans who heard the clash of heads that laid him out.

Manchester United target Jimenez was involved in a chilling collision when he competed at a corner as Wolves visited Arsenal on Sunday, falling motionless to the turf after being poleaxed by an aerial challenge with Brazil defender David Luiz.

Broadcasters decided not to provide close-up replays of the horror incident, although viewers already had a clear appreciation of the severity of the problem after hearing a huge crack as the corner came in and watching players and medical staff rush to revive the prone pair.

The match was delayed for ten minutes as Portugal striker Jimenez was given oxygen before departing on a stretcher and being taken to hospital, leaving both teams in a state of shock at the harrowing injury.

Horrible incident at the Emirates.

Raul is comfortable following an operation last night, which he underwent in a London hospital.

He has our love and support as he begins a period of recovery.

We’re all with you, @Raul_Jimenez9.

He’s now “comfortable” in hospital where he’ll remain for a few days under observation.

Wolves: “He has since seen his partner Daniela and is now resting.”

“Raul is comfortable following an operation last night, which he underwent in a London hospital,” Wolves confirmed on Monday.

“He has since seen his partner Daniela and is now resting. He has our love and support as he begins a period of recovery.”

Wolves captain Conor Coady was one of the nearest players to Jimenez when he was laid out. “You don’t want to see that on a football pitch,” the defender told Sky Sports.

“It’s horrible to see. I’ll be honest with you, I just heard it. I jumped with them both as the ball came in to the near post.

“You hear the noise. They both drop and you see they’re both there. When you see that they’re not really responding, it becomes horrible to see.

Feeling sick just watching to be honest, can’t imagine how his team mates and Nuno are. Prayers and positives vibes all to Raul Jimenez.

Let’s hope he gets well soon mate . Petr Cech had a fractured skull and made a full recovery and played for years . Hopefully he recovers quickly 👍

It’s the mentality though. Would he want to be fully committed in a aerial battle again? I mean Cech wore protection after his.

“First and foremost, players’ health comes into question. We just hope and pray that he’s going to be all right, with the sort of person and friend he is.

Wolves boss Nuno Espirito Santo said that the forward had spoken and was “aware” after a troubling few minutes in which medics had alarmed backroom staff by repeating the phrase “code red”.

“He’s OK inside the gravity of the problem,” said the coach. “By the reaction of his teammates and everybody…it’s serious, it was a bad moment for everybody.

“The Arsenal players were worried about him. Now we are worried, of course. You see the panic in their eyes and you start thinking, ‘how is he?'”

Awful looking head injury to Raul Jimenez. Hope it’s not as serious as it appears.

Jeez come on @Raul_Jimenez9 ..you’ve made Wolverhampton so proud with the way you go about your life…🙏🏽 Praying deeply for you 😔 pic.twitter.com/nhr4LmqqRX

“Football needs to get real. It needs to wake up. It needs to get serious. Now.”@alanshearer discusses how David Luiz was allowed to continue playing after a serious head clash with Raul Jimenez.#MOTD2 pic.twitter.com/89uNK7cf3F

The decision to allow Luiz, who had blood leaking from a bandage on his head, to continue until half-time angered pundits and experts and reopened a row over player welfare that has hit the headlines recently after several former players were found to have died through brain-related issues.

“Too often in football, we see players returning to the pitch having undergone a concussion assessment – only to be withdrawn a few minutes later when it is clear that they are not fit to continue,” warned Luke Griggs, the deputy chief executive at brain injury charity association Headway.

“That is the very reason why we urgently need temporary concussion substitutes in football. You simply cannot take a risk with head injuries.

“They are not like muscular injuries where you can put a player back on ‘to see if they can it if off’. One further blow to the head when concussed could have serious consequences.

“The question that has to be asked is had the concussion substitutes rule been in place, would Luiz have been allowed to return to the field of play? Would that extra time in the treatment room have led to a different decision being made?

Get well soon, Raúl Jiménez! Hope you have a speedy recovery. 🙏🏼 #ARSWOL

Good to read that. Wishing you a speedy recovery bro the game needs you 🙏🏾🙏🏾

“The concussion protocol clearly states that ‘anyone with a suspected concussion must be immediately removed from play’, while the sport continues to promote an ‘if in doubt, sit it out’ approach to head injuries.

“Time and time again we are seeing this rhetoric not being borne out by actions on the pitch. Something is not right. This cannot be allowed to continue. How many warnings does football need?”

Premier League legend Alan Shearer was furious with the footage. “If David Luiz has passed all the protocols like Arsenal say he has, how on earth is he allowed back on to the pitch with a wound that is dripping down his face?” the ex-England striker asked on the BBC.

“We’re talking about life and death and players’ careers ending. They’re on about trialing concussion substitutes.

“Why do they need to trial anything? Just do it. Do it now. If things needs changing after that, change it.

“Football’s protocols allow someone who has a cut that is seeping through a bandage that has just been put on to carry on playing. Then he has to go off again 20 minutes later because he can’t head a ball.”

The Mexico hotshot became Wolves’ record signing when he joined for $39 million in 2019, rewarding that investment with 27 goals in 55 matches last season to attract enquiries from Manchester United and Juventus in the summer. 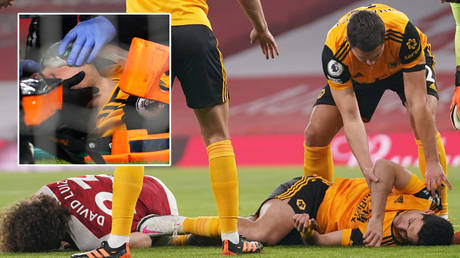