‘We offered Dustin and Conor a fight’: Dana White attempts to broker McGregor deal as he rubbishes links to Pacquaio fight (VIDEO)

‘We offered Dustin and Conor a fight’: Dana White attempts to broker McGregor deal as he rubbishes links to Pacquaio fight (VIDEO)

Dana White revealed figures in Saudi Arabia’s sport community threatened to sue Conor McGregor for falsely stating links to Manny Pacquiao fight, and that he is brokering a deal for McGregor and Dustin Poirier to fight in the UFC.

White dismissed reports that McGregor and Pacquiao will compete in a high profile boxing match later this year just days after McGregor released a fight poster proclaiming that a showdown between the two combat sports icons is set to take place in the Middle East in “Winter 2020”.

What’s more, White told Robbie Fox of Barstool Sports that unnamed figures embedded in Saudi Arabia had contacted McGregor and demanded that he take down the poster which he had posted to social media.

“I don’t know if you just saw but the Saudis went after Conor and basically said it’s a lie that that fight is happening, and you better take [the poster] down in the next 15 minutes or we’re going to sue you,” White said.

“He took it down. You don’t see the post anymore of him and Pacquiao that he had posted.”

If it’s a fight @TheNotoriousMMA wants, it seems to be a fight he’ll get.@DanaWhite tells @RobbieBarstool that an offer has officially been made to Conor McGregor & Dustin Poirier (@DustinPoirier) for a fight inside the UFC. They are currently waiting to hear back. pic.twitter.com/cOXKZ8FAPu

The UFC president also addressed McGregor’s proposal for a charity MMA bout with Dustin Poirier in which he had suggested the pair meet for a fight in Dublin on December 12, with the proceeds from pay-per-view and various television network deals to be split between Poirier’s “Good Fight Foundation” and various charities which McGregor described as being close to his heart.

White, who holds contractual rights over McGregor’s combat career, would need to sign off on any potential fight involving McGregor taking place outside the UFC.

An accord was struck to arrange the hugely-lucrative 2017 boxing match between McGregor and Floyd Mayweather and, while he didn’t expressly rule it out, White appeared to have his own solution.

“Then he called out Poirier for a fight with Conor in Dublin for charity, so we offered them both a fight,” White said.

“We offered Dustin and Conor a fight. We’re waiting to hear back from both of them.”

Within minutes of the interview appearing online Poirier tweeted in response to White saying simply, “I accept.”

There have been no further information related to the McGregor-Pacquiao rumors since they first arose last week but McGregor has long been thought open to a return to the boxing ring, while Pacquiao was quoted on the record as saying he would be interested in a fight with the Irishman.

Links for a fight between the two stars have been rife since Pacquaio signed up with Paradigm Sports Management in February – the same firm that represents McGregor.

Elsewhere in the same Barstool Sports interview, White also confirmed reports that he had attempted to engineer a season of their reality TV series “The Ultimate Fighter'”featuring McGregor and his heated rival Khabib Nurmagomedov.

“He was going to do it until Conor started doing all this sh*t,” White said of Nurmagomedov.

“I felt like I was in a good place and I was going to get that done.

“We were going to the ‘The Ultimate Fighter’ on ESPN and f***ing do the rematch but, you know, Conor blew that. 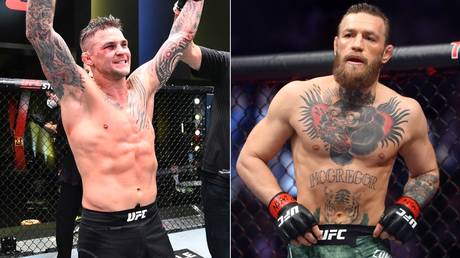