Iceland’s prime minister has called for the country’s football association to address sexual abuse after the organization’s entire board resigned following a woman’s claim that a national team player assaulted her in a nightclub.

Thorhildur Gyda Arnarsdottir told public broadcaster RUV that an Iceland star attacked her in a Reykjavik nightspot in September 2017, adding that she had joined another woman in filing police reports against a player for sexual assault that night.

The 25-year-old went public after the chairman of the Football Association of Iceland (KSI), Gudni Bergsson, said that it had not received any complaints about sexual offenses by players – but the supremo and his board resigned in the aftermath of Arnarsdottir’s allegations.

The head of state, Katrin Jakobsdottir, held a cabinet meeting over the scandal and said she was saddened that the allegations had been needed to launch a wider exploration of abuse within football in her country.

#KSI The entire 16-person board of Iceland’s football federation has resigned after a woman accused it of covering up claims of alleged sexual assault by a national squad player.

“I hope this will be a learning curve for the football movement,” she said, adding that she has “great admiration for the victims” who went public.

Icelandic media reports say accusations have been circulating about current and former national team players, and Thorhildur told the Visir newspaper that at least six other players have been accused of sexual assaults.

“I just hope that this has shown us, as a society, that we need to start believing in victims when they step forward,” she said, expressing relief that KSI’s board had resigned.

Swedish club Gothenburg said that one of its players, who was not named, was reported to police regarding allegations of “sexual harassment in 2017”.

“The police investigation did not lead to any prosecution, but the parties agreed on a settlement,” it said, with club director Hakan Mild adding: “IFK Gothenburg takes this very seriously, even if the case, in the legal sense, is closed,” said.

After making the false claim on live TV that no sexual assault incident had been reported to KSÍ and after the public knew about him offering a NDA agreement to a survivor, the president of KSÍ has resigned. #wallofsilence #fearlessfootball #abuseinfootball #football #metoo

Dadi Rafnsson, the head of football development at top-flight side HK, said a “toxic boys’ culture” exists around football in Iceland which is “so hard to work against”.

“It permeates everything and is everywhere, so people do not see when things are not right,” the doctor of psychology told Kjarnin.

“It is not limited to football but it is a problem for boys. We may be preparing them a little badly for the real world.

“It is as if they are to sail through things without putting in the effort while the women are supposed to be responsible and work hard and maybe they will get the progress – but the boys think they deserve it.

“The interesting thing is that when you reach out to boys and young men one by one, they know exactly what is true, good and right. But when they get together in a group, some bad culture arises.”

Vidar Halldorsson, a professor of sociology at the University of Iceland, warned that accusations against footballers put parents in a difficult position when their children admire the team.

“This is naturally a huge issue in Icelandic society and it just shakes society,” he told Visir.

“There are our heroes, fallen from a pedestal, and role models for children and young people, so parents do not quite know which foot to step on.

“This is a very big issue and a very complex issue in many places and we know that this sexual harassment of women has been going on for centuries but is now manifested in this way in football.

“But this naturally applies to the whole of society; this is what women and girls have been fighting against for a long time, to eradicate this and bring it to the surface, and this is happening in all areas of society.”

KSI issued a statement pledging to root out problems and work for change.

“Work is already underway with external professionals to review all responses to sexual offences and violence within the association and how support was and will be provided to victims,” it said. 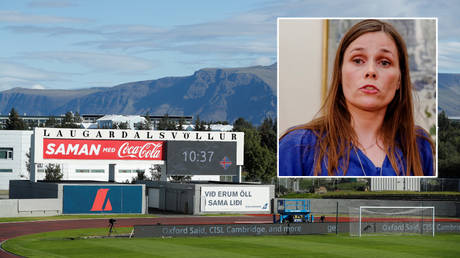 Russian gas supplies to Europe via...