A child who challenged Magomed Ismailov to a boxing session received more than he bargained for from the Russian MMA heavyweight, putting on gloves to rain punches at the former combat sambo world champion in a playground scrap.

The youngster appeared to be fighting with one shoe and sweating profusely as he rained in blows on the 34-year-old in a concrete space near a block of flats, making the man who won a bloody bout against countryman Alexander Emelianenko last month duck and dive to dodge his attacks.

In a contest that was mercifully less concussive than Ismailov’s third-round victory in Sochi, the boy threw hooks, clinched the professional to halt his come-forward style and absorbed jabs as they moved around in the makeshift ring.

Ismailov was perhaps keen to test himself against a much smaller opponent, having conceded 49 pounds (22kg) to Emelianenko in a battle dubbed “David versus Goliath” at Absolute Championship Akhmat 107.

“But the little [man] Ansar came up with a proposal to box.

“I agreed, but there was one condition – we move until I say ‘stop’.

“We worked for about 20 minutes. Ansar was tired but worked to the end. I call this a man’s character.”

Ismailov admitted that he was nearing the end of his career after continuing his impressive 11-fight unbeaten streak stretching back to 2014.

Judging by the intensity of the exercise and the determination on his sparring partner’s face, the Fight Nights Global powerhouse is clearly capable of inspiring a new generation of talents.

Two-time Olympic wrestling champion Roman Vlasov said the boy had “definitely” provided a challenge for Ismailov, and unbeaten Russian featherweight Armen Gulyan responded by calling Ismailov a “magician” who would “take anyone on, even in the playground.”

Ismailov had published a video of Khabib Nurmagomedov the previous day, showing the UFC lightweight champion suggesting that the veteran should face Bellator middleweight Alexander Shlemenko in his next fight. 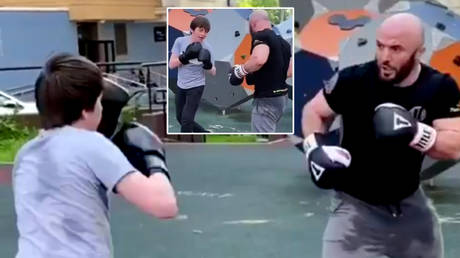