Close
Trending News
HomeSport‘We have no choice but to call on you’: World champ Maria Lasitskene among top stars to ask Putin ‘to save’ Russian athletics

‘We have no choice but to call on you’: World champ Maria Lasitskene among top stars to ask Putin ‘to save’ Russian athletics

‘We have no choice but to call on you’: World champ Maria Lasitskene among top stars to ask Putin ‘to save’ Russian athletics

Top Russian athletes, including world champion high jumper Maria Lasitskene, have turned to President Vladimir Putin asking him ‘to save’ Russian athletics, which they claim to be ‘on the verge of disaster.’

The athletes, who are not eligible to compete on the international circuit even under neutral status, asked the Russian head of state to find a way out of a crisis spanning more than five years.

In an open letter addressed to Putin, the athletes complained that nothing had been done to solve the unprecedented crisis sparked by claims of state-sponsored doping, despite having constant assurances from Russian officials to protect clean competitors.

“Dear Vladimir Vladimirovich, Russian athletics has been in crisis since 2015. During that period a great number of officials, including the head of Russian Olympic Committee (ROC), Sports Minster and chief of Russian Athletics Federation (RUSAF) have been replaced. We have constantly heard statements that everything possible has been done to protect Russian athletes,” the letter read.

“And now, five years later our athletes and coaches are not even allowed to show their potential, as they are prohibited from performing internationally even in neutral status. Starting from July 1 our national federation could be completely expelled from World Athletics if the fee imposed by the governing body is not paid.

“Last year, you tasked the ROC with working out necessary measures to restore the international membership of RUSAF, making it clear that you worry about the fate of Russian track and field and athletes.

“One year has passed since then, but the situation has only deteriorated. We still don’t see any plan to solve the crisis and have no choice but to address you personally.

“We want to direct your attention to the catastrophic state of things in Russian athletics. We are on the verge of disaster. We hope for your support and understanding,” the statement said.

In order to be reinstated, RUSAF is obliged to pay an $11 million fine to World Athletics, which is threatening to exclude the Russian body if it does not receive the money before July 1. 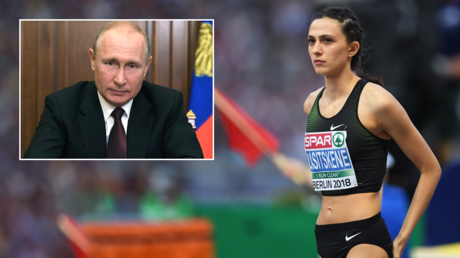