One of the UFC’s top fighters, No. 1-ranked bantamweight contender Marlon Moraes, has been ruled out of action after testing positive for COVID-19.

The former bantamweight title challenger and his wife both tested positive, with Moraes’ spouse forced to spend a day in hospital to treat her symptoms.

The UFC star admitted the pair were both left feeling “weak” by the coronavirus as the pair look to battle COVID-19 together.

The news comes as a further blow to Moraes’ fighting career. The Brazilian’s most recent outing saw him take on former UFC featherweight champion Jose Aldo at UFC 245 last December, where he edged a split-decision against the UFC legend after three highly-competitive rounds.

However, despite his victory, UFC president Dana White strongly disagreed with the judges’ decision on the night and opted to treat Aldo as if he, and not Moraes, had won the fight.

It resulted in Aldo being handed the shot at the vacant UFC bantamweight title at UFC 251 last weekend, where he was finished by Russia’s Petr Yan in the fifth round.

But, while he may have felt it should have been him in the octagon fighting for the belt at “UFC Fight Island” in Abu Dhabi, his positive test meant he was stuck at home, regardless.

“Unfortunately, we got infected – my wife and I,” he told ESPN in Brazil.

“We were very weak, at some point we had very serious symptoms

“It’s good that I didn’t have to go to the hospital, but I had to take (my wife) there.

“We spent the day in the hospital, my wife was prescribed medication, and then she remained under surveillance.”

Following Yan’s title victory over Aldo, Moraes will be keen to get healthy and get back into the title hunt once again.

And with Moraes holding a spectacular knockout victory over the man expected to provide the challenge for newly-crowned champion Yan, Aljamain Sterling, the Brazilian will be determined to get back to full fitness as swiftly as possible and make a big statement upon his return. 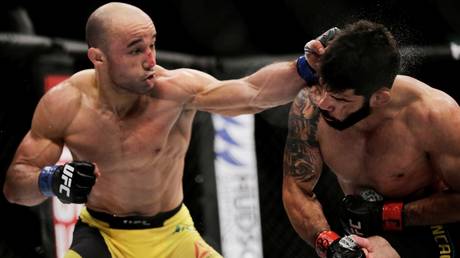