‘We didn’t quite understand’: Medvedev shared Djokovic confusion over Australian Open booing, says he does not want Covid vaccine

‘We didn’t quite understand’: Medvedev shared Djokovic confusion over Australian Open booing, says he does not want Covid vaccine

Australian Open finalist Daniil Medvedev has described the reaction to the tournament closing ceremony, when an organizer refenced politics and a Covid-19 vaccine, as “strange” – and said that he would not choose to have a jab.

ATP Tour Finals winner Medvedev missed out on his first Grand Slam before taking part in a ceremony that courted confusion as speaker Jayne Hrdlicka was greeted with occasional boos.

Jeers from the lively crowd were first audible when Tennis Australia boss Hrdlicka spoke of her optimism about the emergence of vaccines, and the boos grew louder when she praised politicians in the Victoria region during a week when a snap lockdown had been introduced.

“Even Novak and I didn’t quite understand what was being discussed,” said Medvedev, who has risen to number three in the rankings despite his 20-match winning streak coming to an end against the world number one.

“When you are standing on the court, it is hard to hear what is being said into the microphone – especially when the audience is making noise. There were two strange reactions there.”

Djokovic endured criticism for questioning whether vaccines should be mandatory last year, and Medvedev shared his opinion that free choice should be allowed.

“If we talk about vaccination, we have not discussed this much with our fellow tennis players,” he said.

“As for me personally, I will not be vaccinated for medical reasons related to vaccines.

“Naturally, I believe that this should be everyone’s choice. It is never really known what the conditions will be in different countries in connection with the tournaments, how serious it will be.

“But in principle, everyone on the tour should probably be treated in such a way that it just should be everyone’s choice.”

There has been speculation that athletes who take part in the Olympic Games, which are scheduled to run from July the 23rd until August the 8th in Tokyo, could be fast-tracked for vaccines in an attempt to reduce the risk of the virus spreading among the traveling competitors.

“If the Olympics are held, it will be on my calendar,” said Medvedev, who could be prioritized to take part in the tournament as one of the top 56 players in the world. “I have always dreamed of playing at the Games.”

Aslan Karatsev, the Russian whose heroic charge from qualification to the semifinals also ended at the hands of dominant Djokovic, has leapt from 114th in the world to 42nd as a result of his remarkable run in Doha and Melbourne. 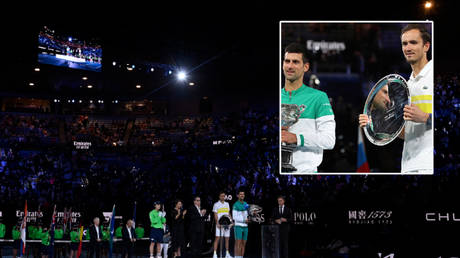