‘We didn’t kiss him on his face’: Mayor claims social distancing ‘maintained’ at wedding attended by Salah as star self-isolates

‘We didn’t kiss him on his face’: Mayor claims social distancing ‘maintained’ at wedding attended by Salah as star self-isolates

The mayor of Mo Salah’s hometown says that social distancing was adhered to at a wedding attended by the Egyptian star despite videos showing the maskless Liverpool forward dancing in a crowded hall.

The Egyptian Football Association announced on Friday that Salah had tested positive for Covid-19, but stated that the player was not suffering from any symptoms. However, the governing body soon modified its announcement to say that three players had taken a second coronavirus test, but later confirmed Salah’s diagnosis.

Attention soon turned back to Salah as questions were raised as to the two-time African Player of the Year’s adherence to social distancing regulations after video emerged of Salah dancing at his brother Nasr’s wedding surrounded by crowds of people.

Salah was seen with a facemask around his neck while few, if any, of the other revelers captured in the footage appeared to be wearing medical masks credited with helping to slow the spread of the potentially fatal virus.

Mo Salah tests positive for Covid after doing this at a wedding. Seriously, we need to stop players leaving their club bubbles amid this pandemic.

International breaks are not working on so many levels #LFC pic.twitter.com/02WzezFVuk

But responding to suggestions that Salah was reckless and inconsiderate in his actions, the mayor of Nagrig, Maher Shtiyah, said that attendance at the wedding was limited.

“Salah removed his mask only while taking photos. Even when we embraced him, we kissed him on his shoulder, not his face.”

1) international games should have stopped.
2) salah was at a wedding and an award ceremony without a mask or social distancing

I’m a Liverpool fan but I am upset by both of these decisions tbh.

Mo Salah out here photobombing a wedding couple’s shoot while in quarantine. You love to see it. Never a dull moment with him for sure. 😅😊 pic.twitter.com/UfIfBujmUe

Can’t even blame internationals for this, he attended his bro’s wedding and not social distancing at all. Party like crazy and all. Sigh Mo….

The Liverpool star was also present at a separate event arranged by the Egyptian FA (EFA) to honor the player for being the first Egyptian to win the Premier League and the Champions League – and perhaps sticking to the script, Amr El-Ganainy, interim president of EFA, said that measures were taken to ensure the safety of everyone who attended.

“He appeared in the ceremony for no more than five minutes, entered a corridor alone, respecting social distancing and wearing a mask.

“He received the award himself… according to Liverpool’s requirements.”

Salah will now miss Egypt’s forthcoming African Cup of Nations qualifying game against Togo this coming Saturday, while it also remains likely that his diagnosis will keep him from Liverpool’s starting eleven for their next two games against Leicester on Sunday and the Champions League clash with Atalanta the following Wednesday. 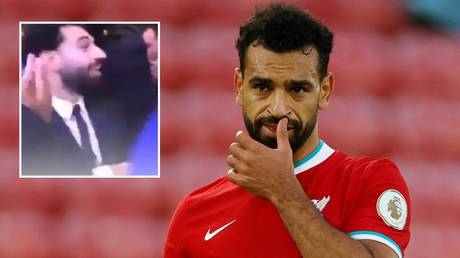