‘We could be writing obituaries right now’: Valentino Rossi CHEATS DEATH as TWO flying bikes miss him by INCHES after 200mph crash

‘We could be writing obituaries right now’: Valentino Rossi CHEATS DEATH as TWO flying bikes miss him by INCHES after 200mph crash

The Austrian MotoGP race at the Red Bull Ring was inches from a horrific tragedy as TWO flying bikes narrowly missed MotoGP legend Valentino Rossi and his teammate Maverick Vinales after a terrifying crash.

The crash itself involved Italian rider Franco Morbidelli and Frenchman Johann Zarco, whose bike tangled at the fastest part of the circuit with the two bikes at 200 miles per hour.

The two riders fell to the floor and slid into the grass, while their bikes hurtled towards the corner and flew through the air, missing Rossi and Vinales by mere inches.

what the fuck #motogp pic.twitter.com/20cTCJcosq

what the fuck #motogp pic.twitter.com/20cTCJcosq

Someone was looking out for this man today 🙏

The crash instantly forced the race to be red-flagged, and Rossi returned to his pit garage looking visibly shaken.

Various camera angles showed the scale of the crash, and highlighted just how close Rossi was to being struck by both flying bikes which narrowly missed the Italian legend.

Remarkably, despite their terrifying high-speed crash, both Morbidelli and Zarco left the scene of the crash under their own steam.

Valentino Rossi looks visibly shaken after the crash between Morbidelli and Zarco.

Rossi’s onboard footage shows the bike bounce over him 😳#AustrianGP pic.twitter.com/5t9DZ3VUWW

The crash prompted a host of comments from stunned observers online, with MotoGP writer David Emmett commenting, “Rossi and Vinales literally dodged a bullet there,” while fellow motorsport writer Chris Medland offered, “I’m so glad we’re talking about how lucky people have been rather than unlucky. Going to be on edge for the rest of this race after that. Still amazing that Zarco and Morbidelli walked away – that crash was at 200mph. 200 MILES PER HOUR.”

MotoGP journalist Simon Patterson said things could have turned out much, much worse, saying, “That’s possibly the most horrific crash I’ve seen in two decades of watching racing. We could so easily be writing obituaries right now, given the speeds involved in that crash. Terrifying.” 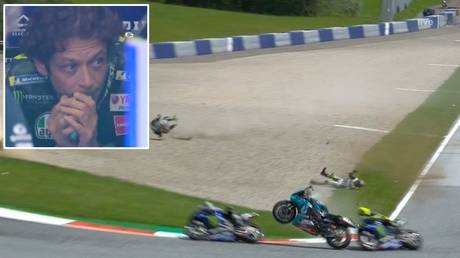