‘We condemn any form of violence or abuse’: ATP releases statement in wake of claims against German star Zverev

‘We condemn any form of violence or abuse’: ATP releases statement in wake of claims against German star Zverev

Following intense pressure from tennis fans on social media and journalists covering the sport during the Paris Masters earlier this month, the governing body of the men’s professional game has voiced its opposition to any behavior that is abusive, violent or puts others at risk, and has stated that it expects all athletes to refrain from such conduct.

At last, more than two weeks after this initial allegations by Olga Sharypova against Alexander Zverev, the ATP has put out a statement regarding domestic violence: pic.twitter.com/DdPK2ZvYDA

Not commenting specifically on the allegations made against world number seven and US Open finalist Zverev, the ATP said that any action against tour members would be dependent on the outcome of investigations by legal authorities.

The announcements are the latest chapter in a tumultuous period for the tennis authorities, who have been subject to deeply critical coverage during the Paris Masters on social media.

Since the allegations were made, the ATP’s media teams have seemingly been minimizing Zverev’s coverage in response aside from an article on its website where he expresses enthusiasm at the idea of playing Novak Djokovic again.

As it stands, Sharypova has not pressed charges against her former boyfriend, meaning that the allegations are unlikely to be tested through a legal process any time in the immediate future, leaving the matter in the court of public opinion and on the merits of her public testimony.

In an interview with Racquet last month, Sharypova said that during her 13-month relationship with Zverev he subjected her to psychological and physical abuse. She alleges that, while in New York at the 2019 US Open, Zverev tried to choke her with a pillow, and then stole her passport when she fled the hotel, in order to stop her leaving the relationship. He apparently had pushed, shoved, and twisted her arm in multiple altercations during the relationship.

Sharypova alleges that the abuse escalated when Zverev punched her in the face at a Laver Cup event in Geneva. She claims this last altercation led to her attempting to take her own life through overdosing on insulin, before the relationship ended with her leaving him in China through the help of her friend’s stepmother.

Zverev has released two statements denying the claims. Initially, he posted a comment on Instagram, which was later followed up with a statement before the ATP Tour finals in London, where he further denied the accusations made by Sharypova.

He said: “These accusations are just unfounded and untrue. We had our ups and downs but the way our relationship is described in the public is not how it was. That’s not who I am, that’s not how I was raised by my parents.

“It makes me sad the impact that such false accusations can have: on the sport, on the outside world, on myself as well. I truly apologize that the focus has shifted away from the sport.”

Commenting on the media attention directed his way, he added: “While I very much regret that those allegations have been made, I have to stick to my initial thing of them being untrue and continue to deny them.”

The announcements contrast with his on-court address in Paris following his 7-5 4-6 1-6 6 defeat in the final to the Russian world number four, Daniil Medvedev, where struck a much more bullish tone.

During his runner-up speech in Paris, he said he felt incredible on court and that “the people who are trying (to wipe a smile off my face) can keep trying.”

READ MORE: ‘He tried to suffocate me with a pillow’: Ex-girlfriend of tennis star Zverev accuses him of abuse

While it is unlikely that the allegations will be investigated by any official bodies, the accusations are likely to influence his coverage in the media during the ATP Tour Finals in London.

The competition begins on Sunday 15 November with Zverev seeded fifth, and set to take on fourth seed Medvedev yet again on Monday, November 16. 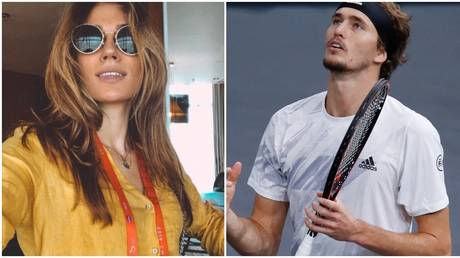