Just a day after claiming he would face Michael Chandler before the end of the year, UFC lightweight contender Tony Ferguson has surprised fans by naming Charles Oliveira as his opponent on the same card as Russian star Petr Yan.

Ex-interim lightweight champion Ferguson had been desperate to make his return before the end of the year, telling UFC newcomer Chandler that he had “asked for it” on Friday.

Former Bellator king Chandler, who was the unused understudy for Khabib Nurmagomedov’s title fight with Justin Gaethje last month, has now had his hopes of making his debut for the promotion against Ferguson dashed after Oliveira was named as the opponent for the return of “El Cucuy”.

“We don’t wait,” declared Ferguson alongside a photo of himself looking at a sunset from a darkened field. “We call the shots. Line them up.”

Brazilian Oliveira, who is noted for his ground game alongside the likes of Ferguson, holds the UFC record for submissions with 14 and has long targeted a big-name fight.

“Do Bronx” was clearly ecstatic at the announcement of the fight for December 12, posting a photo of himself alongside Ferguson to his Instagram following of more than 358,000 and thanking god for the scrap being made.

“What we most wanted happened,” said the 31-year-old jiu-jitsu powerhouse. “We are all going towards victory.

“God is in control of everything and you can be sure that victory is ours.”

Ferguson faces what looks like a tough test in a crowd-pleasing clash that will be his first since a grueling decision defeat to Justin Gaethje in May.

Oliveira is on a seven-fight winning run featuring five submissions and two knockouts since his defeat to Paul Felder at the end of 2017.

Their encounter at UFC 256 will be on the same card as Petr Yan’s acrimonious fight with Aljamain Sterling, when the Russian star will defend his bantamweight title for the first time.

Since the bout was announced, Sterling has used social media to warn Yan that he will set a “high pace” in a “beautifully violent” fight.

Your “high pace” won’t break nobody except yourself. Your strikes not precise or strong enough. When I will hit you, I will hurt you. When you go reaching for my legs, you will be lying tanning just like Askren https://t.co/VNPJWgsIDW

Go put your mask back on and shut up https://t.co/ipFt7vv3Uw

Why you care about what i think of you so much? Stop telling people what I know. All I know is I’m putting you to sleep on December 12 https://t.co/fTXp9DCaiE

“Just don’t get taken down, brother,” he told Yan. “I know you’re strong and won’t tap, so you’ll go to sleep.

“Leave your ankles? I’ll leave you on crutches. Leave your arm or shoulder? You’ll have trouble showering with one arm.”

Yan responded in characteristically dismissive fashion. “Go put your mask back on and shut up,” he retorted.

“Why do you care about what I think of you so much? All I know is I’m putting you to sleep on December 12.” 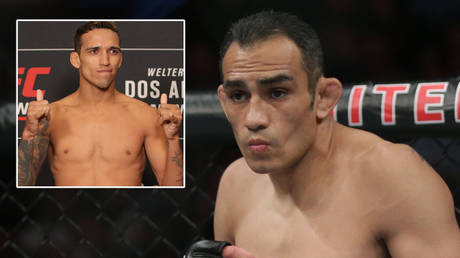