A former US ambassador has left a firm controlled by the cousins leading a bid for Premier League Newcastle, exiting in the aftermath of the pair admitting that a photo of them with ex-President Barack Obama had been doctored.

Kirk Wagar announced his departure from Axington AXIN.SI, which is controlled by Terence and Nelson Loh and chaired by jewellery merchant Evangeline Shen, after “recent revelations” about the group.

The businessmen and cousins were forced to make an embarrassing confession at the weekend over the discovery that a publicity photo showing them meeting Obama alongside Shen, their fellow co-founder of the Bellagraph Nova Group (BN Group) bidding for Newcastle, had been altered to resemble a private meeting.

Shen and the Lohs flanked Obama during a gala event in Singapore in December, but BN Group blamed “errant individuals” working “possibly with malicious intent” after the edited versions of the shots were offered as publicity photos on their website.

The trio founded the group as its sole shareholders and directors this summer, declaring last month that the conglomerate with a turnover of $12 billion was in advanced talks to buy Newcastle.

Reuters revealed “inconsistencies” after contacting firms and individuals the group said it had been involved with. Axington’s shares were subsequently put on trading halt after falling by 15 percent.

In an email, Wagar told the agency: “Due to the recent revelations, I have resigned [my] position and asked for Axington to advise Singapore Exchange and any other relevant parties of that fact.”

Wagar served less than three months on the board of Axington after joining at the Lohs’ request in June, having been Singapore ambassador between 2013 and 2017.

Nereides Antonio Giamundo de Bourbon, the group’s head of investor relations, acknowledged that the company had altered the photos to make it look as though Obama had attended a meeting with its executives in Paris.

While Shen was said to have declined the offer of an interview and the Loh cousins reportedly did not respond to requests for comments, Bourbon claimed: “We are serious people.

“The only ambiguous thing has been the photoshop picture. There wasn’t any malicious aim behind it.”

The event where the photos were taken was sponsored by Novena Global Lifecare, a Singapore healthcare company founded by the cousins in 2010.

In further revelations, the agency found that no company with the group’s name had been registered in France, according to official online records checked on August 21.

Reporters were also unable to find any company at the group’s named headquarters in the French capital during a visit three days earlier, although a receptionist at an office rental business in the building told Reuters that the group had used its space and Bourbon maintained that it had a permanent office there.

The company made headlines on August 15 when it announced its takeover was progressing, enlisting the help of former Newcastle striker Michael Chopra and meeting the retired footballer in Paris.

Chopra tweeted excitedly about the proposed takeover, causing some fans to question why little information appeared to be readily available about the new company and questioning its modest following on the social media platform.

Many of the club’s supporters are desperate for new owners to take over from unpopular current chairman Mike Ashley following the abandonment of a long-anticipated $390 million purchase by the Public Investment Fund of Saudi Arabia last month.

The group needs to pass an owners and directors test carried out by the English Premier League as part of any potential takeover, assessing their suitability to own the club.

Reuters said that Ashley, the club and Chopra had declined to comment about the investigation and Obama’s office and the Obama Foundation had also not responded to requests for comments about the photos.

The Straits Times quoted the group as saying that it intended to appoint independent legal counsel to investigate the posting of the marketing material, adding that it would not address media requests until those queries were complete.

Various statements attributed to the group and published via a press release distributor since its foundation have recently been deleted, with a password now required to view the group’s website.

Chopra last tweeted on August 21, responding to a report that Ashley and his lawyers were yet to respond to the group’s bid by saying: “Still waiting, NUFC.” 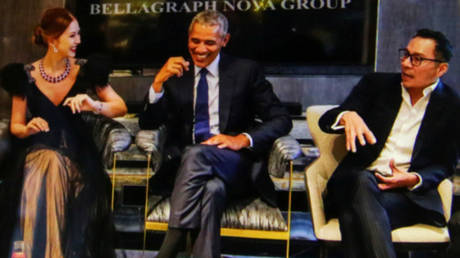