‘We are not at war’: Row rages over controversial plan to replace Russian national anthem with folk-based military song ‘Katyusha’

‘We are not at war’: Row rages over controversial plan to replace Russian national anthem with folk-based military song ‘Katyusha’

A row has broken out over the replacement of Russia’s banned national anthem at major sporting events, with the commission of athletes receiving a mixed response to patriotic song ‘Katyusha’, which was popular during World War II.

Commission members have officially brought the idea to the Russian Olympic Committee (ROC), triggering a range of reactions from prominent athletes and public figures, some of whom adamantly oppose the replacement.

Famed Russian fencer Sofya Velikaya, who was among those to vote for the song, said that ‘Katyusha’ could inspire the athletes to perform at their peak at the Olympic Games.

“This is a patriotic song which is not only famous in Russia, but all over the world. Kids love it, that’s why we have asked the ROC’s Executive Committee to suggest it as the anthem replacement,” Velikaya said.

‘Katyusha’ is a folk-based song and military march which was composed in 1938 by Matvey Blanter with lyrics from Mikhail Isakovsky. It gained nationwide popularity during World War II as a patriotic song which inspired people to defend the motherland.

The song is believed to have given the nickname of the BM-8, BM-13, and BM-31 Katyusha rocket launchers that were used by the Red Army.

Some well-known Russian sports figures were critical of the proposal, saying the song doesn’t reflect the Olympic spirit and reminds many of the war.

“We are facing such a situation for the first time,” said retired former Celta midfielder Aleksandr Mostovoi.

“If the anthem is banned, this means it is banned. Otherwise, we could have composed a new anthem, as it was done before. There are many patriotic songs with a sporting background. ‘Katyusha’ is about war, but we are not at war.”

“This is complete nonsense,” he said. “This was the song of the Great Patriotic war.

“People were dying to this song while fighting against fascism. Many lost their fathers and husbands, and now the ROC wants to make it a new anthem.”

Soviet and Russian figure skating icon Irina Rodnina also rejected the idea, saying that another song, ‘Victory Day’, would be more suitable because of ‘Katyusha’s’ associations with war.

In December, the Court of Arbitration for Sport (CAS) decided to reduce Russia’s international sports ban from four to two years on appeal, but the decision still means the Russian flag and anthem will be absent from the next two Olympics: Tokyo in the summer of 2021 and the Winter Games in Beijing in February 2022.

Russian athletes who are cleared to appear at the Olympics and any world championships will have to do so as neutrals, without the nation’s flag and anthem. 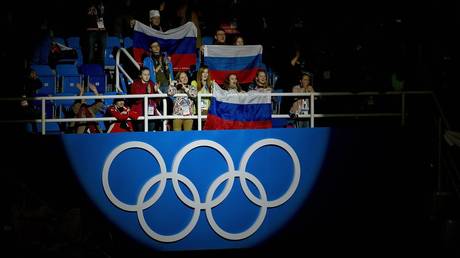 What does Joe Biden entering the White House means for Britain and Brexit?