A man taking part in a reboot of Wipeout, the long-running US TV challenge known for making competitors face obstacles including a set of giant red balls, has died after being taken to hospital when he fell ill on the show’s set.

TV channel TBS, which is bringing the athletic trial back after a six-year absence, confirmed that the tragic contestant had been on set after tackling the course in California when he had to be treated with a defibrillator following complaints of chest pains.

On-site paramedics and doctors were unable to save him after he was taken to hospital.

Each game of Wipeout consist of three rounds, touted as a “jaw-dropping” challenge that promises to “push contestants’ athleticism and determination to even greater extremes”.

This is going to be wild! The new host of @Wipeout on @tbsnetwork is… pic.twitter.com/4U8BDkXU5F

The show pledges to deliver “epic fails”, some of which revolve around the four huge spheres that contestants have to cross from a standing start.

Production is said to have been paused at the end of the week following the death, although filming is expected to resume after the national Thanksgiving holiday in the US.

this is terrible news

Terrible. So sad for the family.

Contestants undergo medical exams ahead of filming, and fans speculated that individuals taking part were likely to have signed waivers around the possible risks of navigating the feat of endurance.

“We are devastated to have learned of his passing and our deepest sympathy goes out to the family,” a TBS spokesperson told the New York Post, releasing no further details on the identity of the contestant and the incident.

The incident is not the first time that a contestant has died after taking part in filming for the show.

Tom Sparks, a 33-year-old former radio DJ, had several brain operations before dying of a stroke two weeks after competing on an obstacle course in 2009, with his father attributing his death to a rare condition. 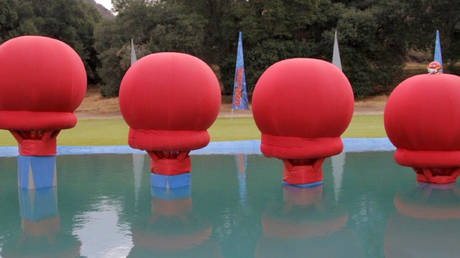