Close
Trending News
HomeSportWATCH: ‘That could have hurt me you f*cking idiot!’ Shocking moment ROOF CAVES IN as Tyson Fury punches bag off hinges (VIDEO)

WATCH: ‘That could have hurt me you f*cking idiot!’ Shocking moment ROOF CAVES IN as Tyson Fury punches bag off hinges (VIDEO)

WATCH: ‘That could have hurt me you f*cking idiot!’ Shocking moment ROOF CAVES IN as Tyson Fury punches bag off hinges (VIDEO)

WBC world heavyweight champion Tyson Fury has sent out an hilarious warning to all potential foes in 2021, by literally bringing the roof down while punching a training bag in camp, narrowly escaping being wiped out.

In a training video shot under the tutelage of trainer SugarHill Steward, Fury can be seen practicing his punches with a few light straight shots, but when the six-foot-nine Manchester fighter follows up with a three-hook combination, what happens next required every little bit of his famous head movement.

Suddenly the bag swings under the weight of Tyson’s blows, and the momentum dramatically brings down part of the gym roof and lighting, which Fury is forced to duck to avoid being injured.

“That could have come down and hurt me you fucking idiot! You fucking fool, Sugar!” Fury laughs, before grabbing the fallen light and growling playfully into the camera.

“What a way to end the training camp!” a training partner shouts from behind the camera.

Fury did try and clean up his mess by attempting to replace the light, but to no avail, breaking in two while in his huge hands. Instead of playing repair man, the ‘Gypsy King’ abandons the wreckage and saunters over to another bag to hone his hooks, all the while being encouraged to break it by his trainer.

READ MORE: ‘He’s a ONE-DIMENSIONAL fighter’: Lennox Lewis says he would have beaten Mike Tyson in his legendary prime

We are all well acquainted with Fury’s powers of recovery, which he displayed perfectly after being floored for a second time against American Deontay Wilder in their first fight in 2018, but we’re not sure how well he would have fared against a roof.

Fury’s third fight with Deontay Wilder fell through earlier this year, putting paid to a trilogy until at least the back end of 2021. The American has made it well known he is eager to avenge his TKO loss to the Brit in their February and reclaim the WBC belt he held for so long.

After that news was revealed, it was announced Fury would not fight again in 2020 as planned, and instead was looking for an opponent and date next year. 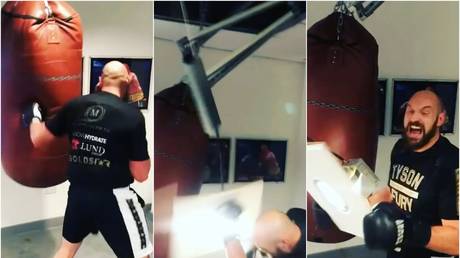