Russian climbing queen Iuliia Kaplina proved she could easily give Spiderman a run (or perhaps a climb) for his money as she broke the women’s world speed record at the IFSC European Championships in Moscow.

Taking part in the qualification rounds against Poland’s Patrycja Chudziak, Kaplina scrambled up the 15 meter (49ft) wall in a time which was eventually recorded at an astonishing 6.964 seconds – shading the previous world record of 6.995 seconds set by Indonesian star Aries Susanti Rahayu back in October of 2019.

The pair are the only women to go under seven seconds in the event, which will make its Olympic debut when sport climbing appears as one of five new competitions at the Tokyo Games next summer.

Kaplina, 27, set the landmark time on home soil at the European Championships in Moscow, which had originally been planned for March but were twice pushed back due to the coronavirus pandemic.

Kaplina already has a host of gold medals to her name from the World Cup and World Games, and claimed silver at the World Championships back in 2012.

She’s also no stranger to setting historic times – Saturday’s feat in Moscow was the 10th time she has set a new world record, with the previous nine times coming between 2013 and 2017. 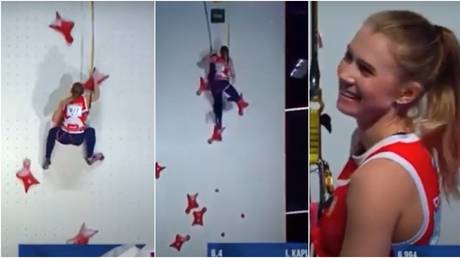 ‘We are devatasted’: Man DIES afte...