Russian junior figure skater Sofya Akatyeva has entered her name into the history books by becoming the first female athlete to nail two quadruple jumps and a triple axel in one program.

The 13-year-old trailblazer effortlessly landed a quadruple toe loop in combination with a double toe loop, before adding another quad toe loop and a triple axel a few seconds later.

The jaw-dropping technical content earned the skater a gold medal at the fourth stage of the Cup of Russia, with judges rewarding Akatyeva generously for her near-flawless jumps.

The skater, who has been coached by renowned specialist Eteri Tutberidze, received 151.32 points for her free program, finishing first in Kazan with a total score of 231.44 points.

Akatyeva is the first Russian female skater to include two quads and a triple axel in one program.

Even Alexandra Trusova, who recently landed four quads at the Cup of Russia, has never attempted to combine quadrable jumps with a triple axel in one routine.

The only skater in the world to exhibit similar technical skills is US star Alysa Liu, who confidently coped with one quad and a triple axel during her free routines last season. 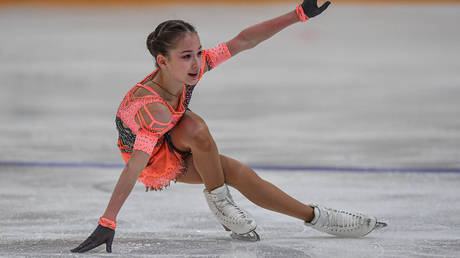