Large numbers of Glasgow Rangers fans gathered outside their team’s Ibrox Stadium home on Saturday as the team stands on the verge of a first Scottish Premiership title in 10 years.

Jubilant fans congregated to greet the team, chant and set off flares before and during the game against St Mirren, which Steven Gerrard’s men won 3-0 to put them 21 points clear at the top of the table, ahead of bitter rivals Celtic.

Rangers fans as Steven Gerrard arriving at Ibrox today, what a reception the manager received! 👏 pic.twitter.com/1151gA3N6c

If Celtic fail to win in their game at Dundee United on Sunday, Rangers will be crowned champions, ending a run of nine successive league titles for their cross-city rivals.

Should Celtic beat Dundee, Rangers can still seal the title by picking up a point when they travel to Celtic Park in the next round of league fixtures on March 21.

Fans gathered en masse at Ibrox on Saturday in anticipation of a long-awaited triumph, despite the lockdown measures still in place in Scotland which restrict large gatherings.

And to think they could win the league at Celtic Park 😳 pic.twitter.com/fwNeTydvF3

“I would remind supporters that in line with current Scottish government coronavirus guidelines, all gatherings are currently prohibited and we would urge members of the public to comply with these restrictions,” police official Mark Sutherland said, as quoted by the BBC.

“Our priority is public safety and an appropriate policing plan was in place and officers engaged with those present to explain and encourage compliance with restrictions.”

A Scottish government spokesperson added their disappointment, saying: “At this crucial stage of suppressing the virus, the actions of this minority of individuals jeopardizes the safety of other supporters, the police on duty and the wider community.”

There were no immediate reports of arrests being made despite the mass gathering.

Rangers players running to the fans outside at full-time as they edge closer to being crowned champions pic.twitter.com/tkaIgCD27H

With former Liverpool and England icon Gerrard at the helm, Rangers have regained their place at the pinnacle of Scottish football after the best part of a decade spent in the shadow of great rivals Celtic.

A humiliating financial crisis in 2012 saw Rangers demoted to the fourth tier of Scottish football, as they were forced to work their way back up the leagues before putting themselves back into a position to challenge Celtic.

Gerrard was named manager in 2018 and has set about transforming their fortunes, this season going unbeaten in 32 league games thus far while reaching the last 16 of the UEFA Europa League. 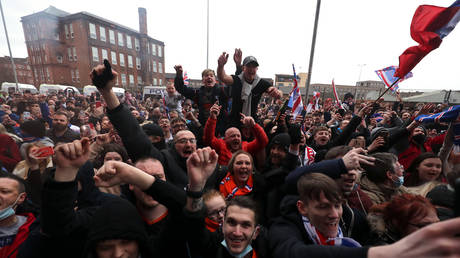