Khabib Nurmagomedov has been captured having a casual chat with megastar friend Cristiano Ronaldo, prompting teammate Islam Makhachev to joke that the UFC champ was putting together a “serious” football team.

Football-mad Khabib counts Ronaldo among his friends and fans, often sharing message of support with the Juventus and Portugal star.

After Khabib’s victory over Justin Gaethje at UFC 254 and subsequent retirement, Ronaldo was among those to pay tribute to the Russian’s remarkable undefeated career.

“Congrats bro, your father would be proud of you,” wrote the 35-year-old forward, referring to the passing of Khabib’s father and trainer Abdulmanap at the age of 57 last year.

The pair remain in contact, as shown in a clip filmed by UFC lightweight Makhachev in Dubai, where Khabib was seen chatting in a video call with a smiling Ronaldo and his son Cristiano Jr.

“Damn, he’s putting together a serious team,” joked Makhachev, apparently fearing Khabib was bringing in some ringers for the next kickabout with his teammates.

Khabib was recently pictured with another star from the world of football, retired Netherlands and Real Madrid icon Clarence Seedorf, whom the UFC fighter hailed as “my father’s favorite player.”

The Dagestani grappling phenom has arrived in the UAE as he prepares to support his cousin, Umar, who is making his debut later this month at UFC 257 on Fight Island in Abu Dhabi.

Khabib is also set to meet with UFC boss Dana White to discuss his future, with White keen to lure ‘The Eagle’ back into the octagon in a bid to extended his unbeaten record to the fabled 30-0 mark.

Khabib and his team were treated to a banquet and giant cake covered with an edible UFC belt when they dined at the restaurant run by Turkish celebrity chef Burak Ozdemir in downtown Dubai on Friday night.

Ronaldo meanwhile is preparing for Juventus’s Serie A game at home to Sassuolo on Sunday, having recorded an impressive 3-1 win at table-topping AC Milan in midweek.

The Portuguese five-time Ballon d’Or winner didn’t get on the scoresheet on that occasion, but has 18 goals in just 16 appearances for the Turin club in all competitions so far this season. 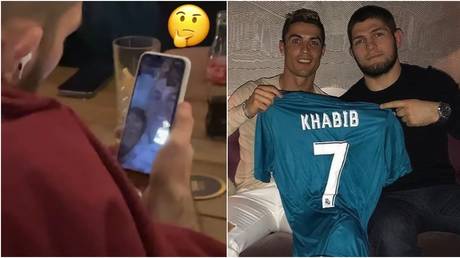 Search operation launched after In...