WATCH: Fire breaks out at iconic Superdome in New Orleans as flames and smoke seen billowing across city

WATCH: Fire breaks out at iconic Superdome in New Orleans as flames and smoke seen billowing across city

A fire has broken out on top of the roof at the Caesars Superdome in New Orleans, which is home to NFL team the New Orleans Saints.

Footage shared on social media showed flames and black smoke billowing from the stadium, which is in the Central Business District area of the city.

The fire was also seen from a distance by motorists in the area.

The Superdome venue has a capacity of around 75,000 fans for football games, and is a multi-purpose center used by a host of other teams and businesses.

#BREAKING
There appears to be a fire on the roof of the @CaesarsDome #NewOrleans #Superdome pic.twitter.com/RwMwsjFWSU

Fire personnel are currently responding to a fire at the Superdome, a large multi-purpose stadium in downtown New Orleans. Live footage shows the fire may be on the roof. pic.twitter.com/FXtkuVLtPb

Just passed the Superdome and it’s on fire! pic.twitter.com/P2NYI0sM4i

The New Orleans Fire Department said it had responded to the incident at just before 1pm local time, but no immediate details were made available, according to US media.

Several people appeared to be on the roof in the vicinity of the fire in clips shared on social media.

Fox 8 Live reports that renovations to the roof of the venue had recently restarted following an interruption by Hurricane Ida.

Well that’s not good. Superdome on fire 😳 (via @Johnny_Pawny) pic.twitter.com/oCbKrhhLtG

The venue is among the most iconic in US sports and was previously renamed to the Mercedes-Benz Superdome after sponsorship rights were sold in 2011.

This July it was renamed again to the Caesars Superdome when those rights were bought by casino and hotel giant Caesars Entertainment.

Local reporter Jeff Duncan quoted a Superdome official as saying that the fire had originated “in the gutter tub” on the roof while workers were pressure washing it, but that the incident is under control and the structural integrity of the building was not compromised.

Doug Thornton, the VP of stadiums for ASM Global which manages the Superdome, tells me via text that the fire at the stadium started “in the gutter tub” on the roof while workers were there pressure washing it and “is under control.” NOFD is on the scene. 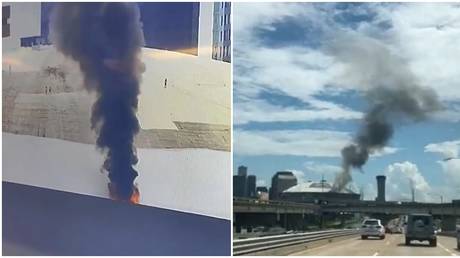