A group of angry Barcelona fans protesting at the impending exit of Lionel Messi were seen charging onto the grounds of the Nou Camp on Wednesday, reportedly in search of beleaguered club president Josep Maria Bartomeu.

Members of the Barcelona faithful have been venting their fury for the second night in a row outside the club’s Nou Camp home after the bombshell news on Tuesday that Messi had formally signaled his intention to leave this summer.

READ MORE: Lionel Messi has made the RIGHT decision to quit Barcelona – now the club must avoid giving him an ugly exit

Fans have demanded the resignation of under-fire president Bartomeu, an already-unpopular figure who is seen as the key protagonist behind Messi’s decision to quit the club he has been at since the age of 13.

Footage from the Nou Camp on Wednesday appeared to show a group of fans taking advantage of a gap in security to stream into the grounds around the iconic stadium.

According to reporter David Ibanez, the fans were in search of Bartomeu, although order was quickly restored by the police. Other reports stated that the Barcelona boss had in any case already left the stadium earlier in the day.

“President Bartomeu has not been in the offices all afternoon. The managers and the president left the club at lunchtime,” wrote local reporter Alfredo Martinez.

Nonetheless, the scenes illustrate the explosive atmosphere at the club as fans face up to the increasingly likely loss of Messi, widely considered Barcelona’s greatest ever player.

Following a disappointing domestic season in which they relinquished their hold on the La Liga title to Real Madrid, Barcelona then suffered a humiliating 8-2 defeat at the hands of Bayern Munich in the Champions League quarterfinal.

That prompted the sacking of manager Quique Setien, although his replacement Ronald Koeman did not get off on the right foot with Messi when he reportedly told them in emergency talks last week that any “privileges” in the team were now over.

Compounding matters, Koeman is said to have told Messi’s close friend and strike partner Luis Suarez that he was surplus to requirements at the Nou Camp in a terse telephone call on Monday.

That seems to have been the final straw for Messi, who stated his intent to leave on a free transfer in a burofax message sent to the club.

The 33-year-old star could, however, be set for a legal battle with club officials as they believe the exit clause cited by Messi expired in June, meaning he remains under contract until the summer of 2021. 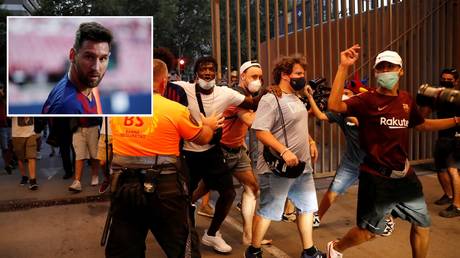