WATCH: Cheeky Neymar trolls goalkeeper by asking him WHICH CORNER to put penalty in

WATCH: Cheeky Neymar trolls goalkeeper by asking him WHICH CORNER to put penalty in

PSG star Neymar is well-known for having an extravagant side to his game and that certainly came to the fore during a friendly match on Friday when he asked the opposing goalkeeper which side he should place a spot kick.

Footage of the cheeky exchange between the Brazilian superstar and the ‘keeper for Belgian side Waasland-Beveren has since gone viral, showing off the softer side of the usually ultra-competitive player.

Ultimately, Neymar didn’t reveal his cards – instead laying off the penalty for teammate Mauro Icardi to blast the ball home.

Neymar asked the keeper which corner to shoot, this guy is so goated. pic.twitter.com/eE35DxoV8f

What an assist of Neymar for Icardi 😳 pic.twitter.com/YerAA0C2c6

The friendly match is the latest in a series of non-competitive games the club are playing in a bid to regain fitness following the suspension of all football in France due to the coronavirus pandemic.

The decision was made to cancel the Ligue 1 season in April, but Paris Saint-Germain are scheduled to return to competitive fixtures when they resume their Champions League campaign next month.

The reigning French champions are due to play away to Serie A side Atalanta in their one-off quarter-final tie on August 12.

Prior to the game against Waasland-Beveren, which the Parisiens won 7-0, the club faced fellow French side Le Havre and wound up 9-0 winners.

They can expect a significant uptick in competition when they return to European action though, with free-scoring Atalanta currently sitting third in the Italian top division just a point below second-placed Inter Milan.

And one also expects that Neymar won’t quite be in such gregarious humor if he finds himself in a similar position in a few weeks’ time. 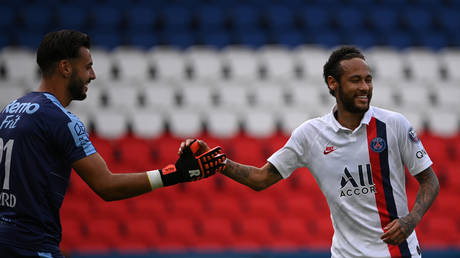