Wrestling champion Aaron Pico hammered John de Jesus to the canvas with a shuddering right hook at Bellator 252, raining in punches as his opponent desperately tried to cover up before revealing the feud that had fueled his win.

Former US wrestling king Pico sent bitter rival De Jesus sprawling on his back with a clubbing overhead hook in the second round of their scrap, then pummeled his stricken opponent on the floor and headed for the fallen flyweight’s corner while launching an angry outburst.

After recording the sixth knockout of his seven professional victories and his third win of the year, the 24-year-old revealed that De Jesus’s dismissive attitude towards him and his coach in the pre-fight hotel – staring him down in a manner known as “mad-dogging” – had riled him to seize upon a tactical secret he had spotted.

“Before the fight, I was honestly just thinking: ‘I want to f*cking knock his ass out,'” said former Olympic hopeful Pico.

AARON PICO WITH AN ABSOLUTE BOMB OF A RIGHT HAND #Bellator252 pic.twitter.com/yrHamBDNtn

He hit him with the pic.twitter.com/7beSe2Wbh2

“I’m happy I did. The way he was [disrespecting me] was cheesy, so that rubbed me up the wrong way.

“It’s one thing to get in a scuffle and yell back and forth but…I don’t even want to talk about it because there are going to be guys who are going to start mad-dogging me now, but just know that it’s not going to work because you saw what happened to the guy tonight.

“I told his corner, ‘thank you for calling out one four’ because all through training camp, my coach told me, ‘one four means a jab, left uppercut’.

“When we were watching the tape, my coach said, ‘if you hear the corner yell out the combination one four, just throw a right hook and he’s going to be knocked out.’

“That’s why it feels good. To actually do it is a good feeling. When he did fall, he kind of was moving around a little bit. The last couple of punches put him out.

“He was a tough guy. I was elbowing him really, really hard. I split him in the first round, he was bleeding all over the place.”

Pico had a poor 2019, losing both of his fights in the first two knockout defeats of his career.

Those setbacks have given him a motivational fear factor. “There might be losses in the future, I don’t know,“ he accepted.

“But I’m going to take my wins and enjoy them as much as I can because I know what it feels like to lose and I f*cking hate that feeling.”

“I have to be like GSP and not respond – not too high, not too low,” he explained. “I don’t really think about the past anymore.

“That’s why my ass is in the gym every day…[losing] scares me, honestly.

“The most important thing is to get in the cage and put on victories like I did today. I’m callous now – I’m very, very callous.”

Pico was not the only fighter to end their encounter in savage style at the event in Connecticut.

Unbeaten welterweight Roman Faraldo sent his opponent, Pat Casey, to the floor with a flying knee to the side of the head, then managed to fire in three vicious punches to the same spot before the referee waved the action off in the second round. 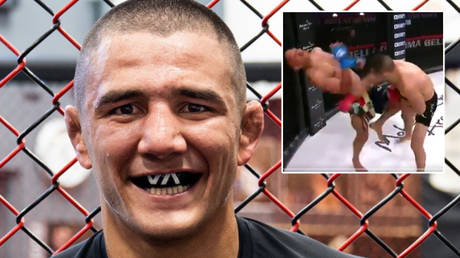