There seems to be no end in sight to the successive scandals rocking the former Washington Redskins after an ex-employee accused the team of editing together clips of partially nude cheerleaders for owner Daniel Snyder.

Brad Baker, who worked with former senior vice president and lead broadcaster Larry Michael, claimed to The Washington Post that he was asked by Michael to assemble a cut of behind-the-scenes footage of the undressed cheerleaders from a 2008 swimsuit calendar shoot for Snyder.

“Larry said something to the effect of, ‘We have a special project that we need to get done for the owner today: He needs us to get the good bits of the behind-the-scenes video from the cheerleader shoot onto a DVD for him,'” Baker was quoted as saying.

Snyder, who has a reputation as one of the more controversial team owners in the NFL, has strenuously denied the allegations and told The Post that he was “unaware” of the existence of the “10-year old videos.“

“I did not request their creation and I never saw them,” said Snyder, later adding that he had been refused a copy of the videos by the newspaper which he had requested for an internal review.

It was also reported by the same newspaper that a former cheerleader, Tiffany Bacon Scourby, has alleged that in 2004 Snyder asked her to visit the hotel room of a close friend of his so that “they could get to know each other.“

Scourby also detailed a long-running atmosphere of women being objectified within the franchise’s halls of power.

A statement from NFL Commissioner Roger Goodell on the @washingtonpost article on the Washington Football Team (https://t.co/ZK24VlTPf8), condemning the behavior. pic.twitter.com/PwkVcoxjEW

Snyder, however, maintains that Scourby had never brought the matter to the attention of the team in the subsequent years which followed. She remains a volunteer for the team’s cheerleaders, Snyder said, adding, “I want to unequivocally state that this never happened.“

The Post has now reported that 25 women have come forward detailing sexual harassment within the team.

“We strongly condemn the unprofessional, disturbing and abhorrent behavior and workplace environment alleged in the report which is entirely inconsistent with our standards and has no place in the NFL,” Goodell wrote.

Snyder, meanwhile, acknowledged in a statement of his own that the responsibility to maintain a respectful working culture falls on him and admitted that he hasn’t taken robust enough steps to counter misgivings within the organization.

“I have admittedly been too hands-off as an owner and allowed others to have day-to-day control to the detriment of our organization,” he said.

“Going forward I am going to be more involved, and we have already made major changes in personnel bringing in new leadership to drive cultural transformation on and off the field. In addition, we are assembling a world class team of external advisors to both investigate these allegations and create an actionable and measurable plan to change our culture.”

Washington Football Team changed their franchise name earlier this summer, after bowing to pressure to no longer call themselves the Redskins – a term considered by many as racially pejorative to Native Americans – amid accusations of long-standing racial inequality within the team. 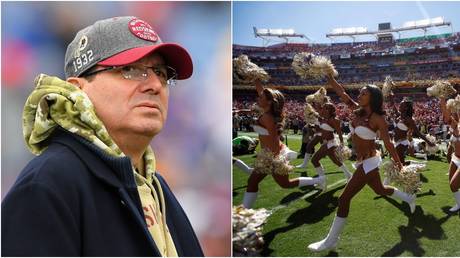