UFC legend Stephan Bonnar says the removal of social media app Parler from web stores is “commie BS” amid an ongoing crackdown of right-wing messaging in the wake of Wednesday’s storming of the US Capitol by Trump supporters.

Bonnar, who is well-known in the MMA community for his classic 2005 brawl with Forrest Griffin in the finals of the UFC’s first-ever ‘The Ultimate Fighter’ tournament, lashed out at what he perceived to be “censorship” in the tech world after Parler, the social media app, was set to be scrubbed from various online stores in the wake of Wednesday’s riots in Washington DC.

This comes after several prominent figures on Twitter, including President Donald Trump, were permanently suspended from the platform, with the tech giant announcing that, in Trump’s case at least, this measure was taken in a bid to mitigate any future violence stoked by the 45th president ahead of the inauguration of Joe Biden and Kamala Harris on January 20.

Trump, along with legions of his most ardent followers, were expected to migrate to Parler, which is advertised as an unbiased platform which promotes free speech.

However, the company has come under fire for a lack of moderation of perceived extremist threats made by followers of groups such as the Proud Boys and QAnon, amid claims that several users have issued threats bordering at terroristic at several prominent figures on either side of the US political spectrum.

But Bonnar, a figure noted for his right-wing sympathies online, isn’t having it.

Dude! This is such commie BS! I can’t believe idiots here are cheering as our rights are being taken away!!!! Wake up u fools! https://t.co/EkE8c8SnXw

“Dude! This is such commie BS!” Bonnar, 43, wrote online. “I can’t believe idiots here are cheering as our rights are being taken away!!!! Wake up u fools!“

Bonnar’s detractors claimed that, as private companies, those such as Twitter have the right to determine who gets to use their services and that any cries of Orwellian censorship are mislaid.

SMH. Apps/websites don’t owe anyone a platform. If you wanna spread your hatred you can shout it from your balcony. That is YOUR right. Just like it’s my right to take down photos I had you sign and throw them in the garbage.

Some supporters, though, backed Bonnar in his claims.

“Marxists want to control u by any means necessary. They now have control of all levers of government,” wrote one.

Bonnar isn’t the only notable figure within mixed martial arts to rail against tech censorship this week.

Jorge Masvidal, the UFC star who campaigned for Donald Trump in Florida in advance of November’s election, said that he was going to “follow the leader” and disavow Twitter in the wake of Trump’s social media expulsion.

“Not too many places I ain’t been kicked out of and since all the cool kids have been kicked off Twitter….@jack. Follow the leader. Ala din my way out of here,” he wrote. 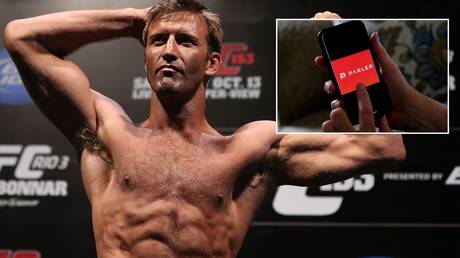 Abramovich does NOT owe me special...