Close
Trending News
HomeSportWake up call: Makwan Amirkhani chokes out opponent, then WAKES HIM UP after UFC 251 submission (VIDEO)

Wake up call: Makwan Amirkhani chokes out opponent, then WAKES HIM UP after UFC 251 submission (VIDEO)

Wake up call: Makwan Amirkhani chokes out opponent, then WAKES HIM UP after UFC 251 submission (VIDEO)

We’ve seen countless submission finishes in the UFC, but there haven’t been too many situations where a fighter helps wake up his opponent. But that’s what happened when Makwan Amirkhani finished Danny Henry at UFC 251.

And after a cagey start to the fight, Amirkhani took Henry to the mat and locked up an anaconda choke that separated the Scot from his consciousness for a stunning submission finish.

But, rather than get up and charge around the octagon in celebration, the Finn stayed by his unconscious rival, untangled his toes from the cage fence and elevated his legs in an attempt to help Henry back to consciousness.

WOW! @MakwanAmirkhani locking in the anaconda to grab the submission! 🐍 #UFC251

It was a classy move from the man known as “Mr. Finland,” whose easy-going character and penchant for spectacular finishes has made him a hardcore fan-favorite in Europe over the years.

It gave Amirkhani a much-needed win after he suffered serious mid-fight fatigue in his last outing, a third-round stoppage loss to Shane Burgos at UFC 244 last November.

“Everything went terribly wrong in my last fight. I got a new opportunity to show I belong here and what I’m about,” he said after the fight.

“I feel amazing, like a reborn child. Victories are always nice, but in the first round is always sweeter.

“It’s never nice when there’s someone on top of you trying to hold you down. It makes you tired and slows you down. That was my plan.

“But I also knew it was early and we both had dry skin, so I just said, ‘Let’s finish the fight quick.’ When I saw the opportunity to go for the anaconda, I secured the choke.”

And after such an impressive win, Amirkhani said he’s ready for whoever the UFC throws in his path next, but stated his ultimate goal is to capture the UFC’s 145-pound title.

“Whoever the UFC offer me, I will always say yes,” he admitted.

“I just want to go back and start my training again. I’m aiming for the belt. That’s where I’m heading, so there’s no time to celebrate.” 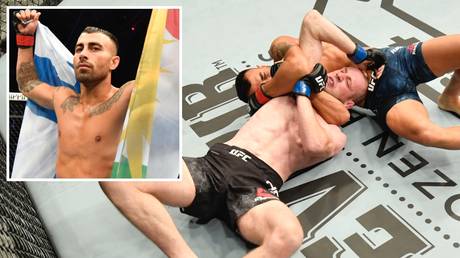 'It didn't resonate with...