Critics have described the Black Lives Matter movement as a “scam” and questioned the point of a move by a Major League Soccer team which has replaced player names with the names of black victims of police brutality.

Philadelphia Union players wore the names of victims on the backs of their shirts when they played New York City FC in the MLS is Back Tournament in Orlando on Thursday.

The shirts also had the message “one name, too many” printed on them, revealed by the players for their pre-match photo after they had warmed up in Black Lives Matter t-shirts.

“Our players stand together,” the team’s Twitter account announced, repeating the message as the players wore shinguards that read “enough is enough,” as well as the hashtag “end racism” and a picture of raised fist.

Our players stand together. One name too many. pic.twitter.com/tPoR8DWveN

Virtue signaling at its finest!

Union goalkeeper Andre Blake had George Floyd’s surname on the back of his shirt and defender Ray Gaddis did the same for Breonna Taylor, explaining that the team had unanimously agreed to “use our platform to be a voice for the voiceless,” feeling that “actions are louder than words.”

The initiative caused a blazing row on social media, where supporters of the campaign clashed with opponents who voiced their anger at the latest endeavor by a team to break with tradition in favor of involving themselves in social issues.

Many asked why victims of other types of violence, including police officers, were not being recognized with similar gestures, while Union backers accused detractors of racism.

“Virtue signaling at its finest,” said one, while another added “BLM is a scam.”

“I’d love to see a team step up and put names of police officers who have lost their lives due to senseless violence,” added one suggestion.

BLM is a scam.

I’d love to see a team step up and put names of POLICE OFFICERS who have lost their lives due to senseless violence.

What about the 7 year old who got killed in Atlanta? Oh wait black lives only matter when it’s white people killing them

A respondent taking the name of the campaign hit back: “I’d love for ‘trained professionals’ to stop killing unarmed African Americans.”

Union manager Jim Curtin said he was “really proud” of his players. “The idea today was action over permission,” he insisted. “I hope the league understands that.

“It was done to show respect, to learn, to grow, to make our country better.”

More than 100 black MLS players raised their right fists and took a knee before the tournament opener between Orlando City SC and Inter Miami CF on Wednesday, when some players wore t-shirts with the words “Black and Proud” and “Silence is Violence” over their shirts.

More than 170 black MLS stars formed the Black Players for Change organization last month, aimed at gaining more of a voice in racial matters, increasing black representation at the highest levels and making an impact in black communities. 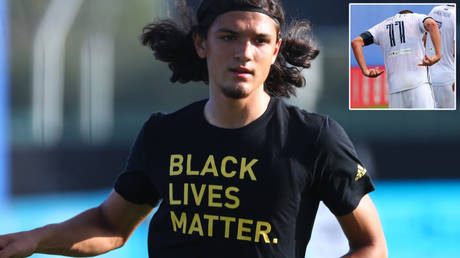 Brits STILL can’t get their brows...

‘I’m struggling to make it flatter...