Retired UFC champion Khabib Nurmagomedov’s coach, Javier Mendez, has stunned fans by sharing a clip of himself taking what he claimed was his first COVID-19 vaccination shot, receiving the treatment to his arm in Abu Dhabi.

Mendez claimed he had received the vaccine, which has not been made publicly available, in the United Arab Emirates on Monday, describing himself as “very grateful” to have received the treatment courtesy of the country’s leadership.

Confused fans asked when the vaccine had become available, warned Mendez not to take the injection and repeated vaccination conspiracy theories after seeing the clip of the title-winning coach having the treatment administered to his left arm by a nurse while sitting in a chair.

“Received my first Covid-19 vaccine shot today in Abu Dhabi,” announced Mendez to his following of more than 527,000 on Instagram. “Thank you, UAE.”

Although no vaccine for the virus that has caused the current pandemic has been officially confirmed, countries have been scrambling to secure doses of the Pfizer vaccine this week, which has been shown to have a efficacy rate above 90% in trials.

A successful vaccine would be a significant step towards the UFC being able to plan events around the world and return crowds to fights, many of which have been taking place on the specially-created “fight island” in Abu Dhabi since July.

Some sportspeople have expressed reservations about taking a vaccine – most notably tennis number one Novak Djokovic, who caused controversy in April when he admitted feeling reluctance at being vaccinated.

“It’s a seasonal flu vaccine,” claimed one fan, watching Mendez chat to the nurse as he took the jab.

“Don’t take a vaccine for a virus with a 98% survival rate,” warned another.

Mendez has been highly active on social media since helping Russian star Nurmagomedov to a resounding victory over Justin Gaethje in their lightweight clash on “fight island” last month.

He has shared photos of himself and Nurmagomedov at events with the likes of Fouad Darwish, the general manager of UAE Warriors, which will welcome the Dagestani hero to their next card later this month.

Alongside a clip of Nurmagomedov laughing, Mendez revealed that his best-known fighter had compared him to Bolo Yeung, an iconic Chinese bodybuilder and MMA practitioner known for featuring in Bruce Lee films.

“The Eagles says I look like Bolo from Enter the Dragon,” he joked. “I say no – he loses all the time.” 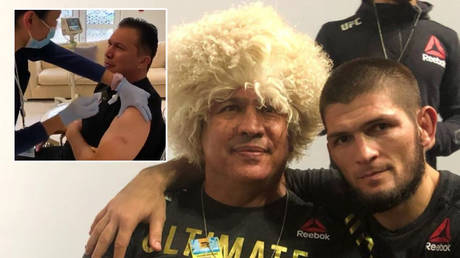