Use the force: Vadim Nemkov ready to take down double-champ Ryan ‘Darth’ Bader at Bellator 244 (VIDEO)

Use the force: Vadim Nemkov ready to take down double-champ Ryan ‘Darth’ Bader at Bellator 244 (VIDEO)

Bader’s heavyweight title win in the final of the grand prix was a stunning 35-second knockout of one of the greatest MMA champions of all time, Emelianenko.

Now “The Last Emperor’s” protege will step up to face Bader for his light heavyweight title looking to capture the belt, extend his unbeaten run as a Bellator fighter and gain revenge for his mentor.

Nemkov has been perfect since joining Bellator, and has defeated a trio of former Bellator champions en route to Friday night’s title fight with Bader.

In his second appearance as a Bellator fighter, Nemkov finished former light heavyweight champ Liam McGeary with leg kicks, then followed up with a split-decision win over another former 205-pound champion, Phil Davis, in his next outing.

Nemkov then took on former middleweight champion Rafael Carvalho at Bellator 230 and finished him via second-round rear-naked choke to add a third former Bellator champ to his list of victims.

That run saw him installed as the No. 1 contender to face Bader, with the pair set to meet on May 9, but the advent of the COVID-19 pandemic forced the postponement of their light heavyweight title fight.

But now, with Bellator back to hosting events once again, Nemkov will finally get his chance to face Bader. If he wins, he’ll take his list of career wins to 13.

But, more importantly, he’ll take Bellator gold back to Stary Oskol and go some way to paying Bader back for his stunning knockout of Emelianenko last January. 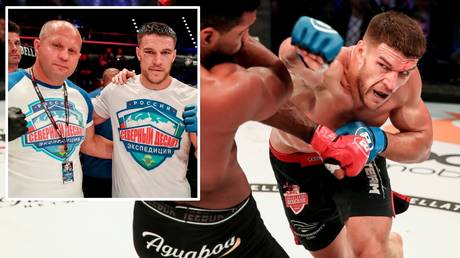