American skier Tommy Ford was airlifted to hospital after suffering a terrifying crash at the World Cup giant slalom event in Adelboden, Switzerland, on Saturday.

Ford crashed towards the ends of his run, going wide into rough snow beside the course then plowing into a gate and flipping over, slamming his head into the ground and sliding down the course on his neck and shoulder.

American skier #TommyFord was flown to a hospital after suffering a heavy crash in a World Cup giant slalom at #Adelboden, #Switzerland on Saturday. https://t.co/iV5IQiLYtV pic.twitter.com/5KVBnEwJtO

There were initial concerns as Ford lay motionless at the foot of the slope, having also collided with an official as he came to a halt.

The event was suspended as the 31-year-old received treatment, but there was relief after Ford regained consciousness and was seen talking to medical staff before a helicopter arrived around 20 minutes later to airlift him to hospital.

The US team later tweeted that the Oregon skier’s “head and neck injuries are minor and resolving nicely. He has a knee injury that is undergoing further evaluation.”

MEDIA ALERT🚨 @ibeTommyFord‘s head and neck injuries are minor and resolving nicely. He has a knee injury that is undergoing further evaluation. 🙏

Relieved fans sent their best wishes to the ski star for a speedy recovery, with one describing the crash as “horrible.”

Horrible crash. He is so competitive he tried to save that last turn knowing he was going to smack that panel. Thank God he is alright.

World Cup veteran Ford has one giant slalom win to his name and two other podium finishes in 12 years on the circuit.

The two-time Olympian will have time to recuperate before his next planned giant slalom appearance on February 19 at the World Championships in Italy, although that will evidently depend on the severity of the knee injury which is undergoing assessment.

When the action resumed in Switzerland on Saturday, French star Alexis Pinturault topped the rankings for a second straight day, finishing ahead of Filip Zubcic of Croatia. 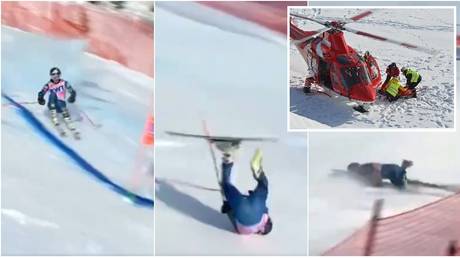